Boyzone Back Again ... No Matter What Review

Perhaps after eight years of Westlife, Boyzone sound like a treat.

When Boyzone were first about, a decision had to be made. It was either Boyzone or Take That. To like both was the ultimate sin in the life of a teenage girl, and if you were foolish enough to choose the Boyzone option, you weren't really worth hanging out with.

Now wanting a piece of TT's comeback pie, they're back, playing a sold out tour to their adoring public, and releasing Back Again... No Matter What - a compilation of their greatest hits, plus three new songs, and a live version of Ronan's Life Is A Rollercoaster.

While the bad are either hilarious (Love Me For A Reason) or coma inducing (You Needed Me), the good amongst Boyzone's 16 consecutive top 5 hits still make us smile. 1998's #1 No Matter What, penned by Andrew Lloyd-Webber and Jim Steinman for musical The Woman In White, was a highlight, particularly as Ronan finally let someone else sing the main part. Ronan's traditional growl is, of course, omnipresent, especially in Baby Can I Hold You, one of four covers. When it comes to new songs, Love You Anyway recaptures the Motown fun first heard in Picture of You but Can't Stop Thinking About You is an awkward electro song that doesn't fit the band at all.

Ultimately there's no denying the greatest Boyzone song - A Different Beat. We are not even slightly being sarcastic here by declaring this one of our favourite pop songs of the 1990s just for its extreme randomness. Yes, for some unknown reason, Boyzone, bored of soppy ballads, decided what they were missing were African drums, chanting, foreign languages, thunder, a rousing middle eight, lyrics to solve world peace and a trembling piano. Everything is forgiven just for these four minutes. Amazing doesn't even cover it.

If you love Boyzone, you'll love this. If not, well you might just find yourself a bit surprised by how many songs you're happily singing along. Perhaps after eight years of Westlife, Boyzone sound like a treat. 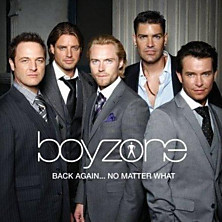