A personal, private fourth LP from the Philadelphia native and select pals.

The last few years have seen a certain upheaval in underground rock music, where artists releasing highly limited runs of what would appear to be obscure and obstinate records are not entirely cut off from the overground. It’s a phenomenon typified by acts as varied as Animal Collective, F***ed Up and Best Coast, and has been helped along by entities such as the All Tomorrow’s Parties festival and the Matador label. It is they who release this, the fourth album – or first studio album, in the literal sense of being recorded in actual studios – by Kurt Vile, who appears a decent bet to go from CD-Rs to CEOs in the near future.

A native of Philadelphia, Kurt Vile calls upon various pals from the locale across Smoke Ring for My Halo’s 46-minute duration – Meg Baird of acclaimed acid-folk ensemble Espers sings backup on opening track Baby’s Arms (an appropriately woozy folk excursion itself), while harpist and sometime Thurston Moore collaborator Mary Lattimore plucks with gusto later on. Add his three-strong band, The Violators, into the equation and it becomes apparent that for all his home-recording loner-indie credentials, Kurt’s cohorts are essential to this album’s sound. A clear development from 2009’s Childish Prodigy, his Matador debut, the prevalence of barroom piano and Kurt’s own tarnished vocal bear comparison to the great and the good of ‘heartland rock’: Springsteen, Tom Petty or Bob Seger, say.

Yet on ostensibly tuneful and stirring songs like Society Is My Friend, there’s a certain off-centre oddness that makes it clear Kurt Vile isn’t built for arenas. While bands are attaining genuine stardom while touting ‘rootsiness’ – Arcade Fire on his side of the Atlantic, Mumford & Sons on this one – Smoke Ring for My Halo is about the personal and private, not the big picture painted by those bands. Peeping Tomboy, another tricksy finger-picked folk number, trades in both romance and cynicism, and a punning title you could imagine The Hold Steady using. As it goes, their comfortable cult following might be a good indicator of what awaits Kurt Vile, if this album gets the attention and sales it deserves. 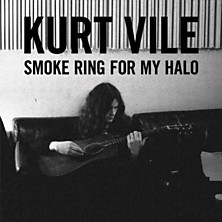