More of a collection of singles than an album ‘proper’ from the two-time chart-topper.

Jason Joel Desrouleaux, aka Jason Derülo, aka Jasoooon Deruuuloooo, has, in his short career, snagged two UK number one singles (including the excellent In My Head) and a top 10 album. He's also one of those pop stars who is able to walk the paper-thin line between awful and amazing with alarming regularity. Take, as an example, Don't Wanna Go Home, the lead single from his second album Future History – his second chart topper in the UK. In just under three-and-half minutes it manages to sample both Show Me Love by Robin S and Day-O (The Banana Boat Song) by Harry Belafonte before falling head first into the whole 'love in the club' lyrical black hole – and yet it still winds up being actually quite listenable.

In fact, "quite listenable" sums up most of Future History. Current single It Girl is a pleasant enough slice of acoustic guitar augmented RnB, with Derülo serenading a future girlfriend with the line, "much more than a Grammy award, that's how much you mean to me" over a rather lovely whistled riff. It's the kind of feather-light ballad Ne-Yo used to write in his sleep before he got lost in the weird conceptual nonsense of 2010's Libra Scale. Luckily, concepts and over-intellectualising aren't problems for Derülo: all 12 songs here revolve around the joys of being in a relationship or the pain of not being in one. The closing Dumb deals with the latter nicely, a spare guitar weaving in and out of a relatively sparse break-up song ("this misery is all I've got"), while the Terius Nash co-write That's My Shhh re-positions Derülo as a Prince-lite loverman.

Perhaps the worst offender is Fight For You, which interpolates Toto's Africa and re-defines the phrase 'will this do?'. It's produced, with crushing inevitably, by RedOne, a man who has made shoe-horning incongruous samples into songs his new stock in trade. Still, this chuck-it-all-in-and-see-what-sticks attitude doesn't stretch to Derülo himself given that he seems to invest nearly all of his being into every note he sings. On the sprightly Breathing he says, "I only miss you when I'm breathing", and does so without a hint of irony.

As with his self-titled debut, Future History is more of a collection of singles than an album, but it feels a little more calculated. There's nothing as undeniable as Ridin' Solo or Whatcha Say and lyrically it's just a mess of meaningless slogans and relationship clichés. Plus, he doesn't utilise the "Jasoooon Deruuuloooo" klaxon nearly enough, and if you're going to have a motif the least you can do is over use it. 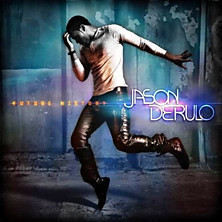