Can The Lost Tapes Review

Can do: quintessential krautrock rescued from the archives.

Three CDs of rehearsal tapes, live recordings, studio jams and forgotten soundtracks might, in the case of most bands, seem like an overwhelming, most likely futile, indulgence. But Can – whose influence, like The Velvet Underground’s, grows with each year – are different. The German band’s entire methodology, beginning with their 1969 debut, Monster Movie, was to leave the studio tape running, editing down whatever emerged from their lengthy improvisations to create some of the most kosmische music of what became known as krautrock. The Lost Tapes, drawn from over 50 hours of recordings covering their entire career, collates the best of what was left behind.

At their best, Can could be transcendental, Irmin Schmidt (keyboards), Jaki Liebezeit (drums), Michael Karoli (guitars) and Holger Czukay (bass) pooling their musical talents on furiously rhythmic freakouts, atmospheric soundscapes and playfully extravagant sonic experiments. With Malcom Mooney on vocals, replaced later by Damo Suzuki, they also had vocalists wholly in synch with their aesthetic: sometimes calm, sometimes frankly berserk. Given their intuitive playing and commitment to experimentation, it’s little wonder Can continue to inspire so many.

For fans of Mooney, The Lost Tapes are an especially welcome treasure trove, offering seven previously unheard tracks, including the deranged Deadly Doris and the 10-minute Waiting for the Streetcar, a classic example of Can’s winning ability to stretch one idea beyond breaking point and still emerge inspired. But there’s more to this collection than just material for completists: though some may struggle to find any purpose in The Agreement’s apparent recording of a toilet, and may wonder if monkeys were let loose in the studio for Blind Mirror Surf, the 16-plus minutes of Graublau – a 1969 soundtrack – are dizzily energetic and excitingly innovative, as good as anything they recorded.

Bubble Rap is another gem, boasting a lazy, low-slung groove before building to a fierce psychedelic climax, and even Barnacles, recorded late in their career, has a pleasant funk within. With staggering live versions of Spoon and Mushroom to boot, The Lost Tapes turns out to be even rarer than its contents: a collection almost as vital as Can’s official album output. 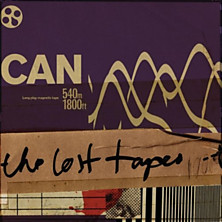