Magazine were an absolute gift for lovers of cerebral pop.

The smart band liked by older brothers who saw no crime in buying Real Life at the same time as Genesis' And Then There Were Three, Magazine were an absolute gift for lovers of cerebral pop. Unfortunately, they never recovered from their initial hype. They carved a very particular swathe through the late 70s, the time when post-punk was known by its old money title, new wave.

And none was more new wave in the broadest sense than their ever enigmatic leader, Howard Devoto. He was smart and dark; never really connecting with punk, he abandoned the band he'd formed with Pete Shelley, Buzzcocks, as early as 1977 suggesting that he was 'not stupid and I refuse to pretend to be.' Corralling Scots art-school guitarist John McGeoch and bassist Barry Adamson, (with a shifting coterie of keyboard players and drummers) the band recorded at Abbey Road and had subsequently little to do with the movement that Devoto had helped shape.

Real Life from 1978 was an engaging debut that was as intelligent as it was oblique, with its swathes of keyboards and Devoto's mannered croon. “Definitive Gaze” encapsulates their singularity of direction; a little nod to reggae and then off on a pomp-rock overture before Devoto steps up, combining John Lydon and Peter Gabriel. “Shot By Both Sides” remains convincing as the album’s single, the group’s Top Of The Pops performance was infamous for sending the record down the charts. The knives were out for their second album, Secondhand Daylight. Produced by the recently departed Colin Thurston, much was made of its similarly to progressive rock. “Permafrost” shows the scale of their ambition.

Correct Use Of Soap from 1980 may be their masterpiece. Pared down, dark and brooding, it sounds extremely fresh, benefiting from a Martin Hannett production, then white-hot from his work with Joy Division. Only Devoto's standing was thus that he could borrow from Dostoevsky's Notes From The Underground on their career-best “A Song From Under The Floorboards” and get away with it. The deft “You Never Knew Me” and their post-punk pre-funk cover of Sly & the Family Stone's “Thank You (Falettime Be Mice Elf Agin)” make this their most satisfying and rounded of all their albums.

With McGeoch departed to Siouxsie and the Banshees and replaced by Ben Mandelson, Magic, Murder And The Weather is often viewed as the poor relation of the Magazine catalogue. It's certainly lower-key and less focussed than its predecessor, but its brave welding of rock and northern soul, most notably on “About The Weather” still sounds as fresh as a daisy. Although instrumentally like Japan at times, it retains a definite charm and as Devoto throws away on “So Lucky”, 'I think it turned out rather well'.

'Magazine were always a connoisseur's choice,' John McGeoch, who died in 2004, was correctly to surmise. 'We broke new ground, we set the tone for the next twenty, thirty years, but we never made much money.' Here's a chance to put a little their way. 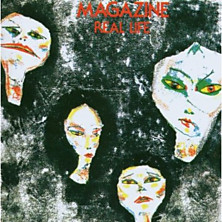