Playful, dizzying, cloud-busting and, perhaps more so than ever before, serious.

Strapping on a guitar is still considered the de facto symbol of rebellion by many. The guitar keeps on killing fascists, apparently.

This is cobblers when so much modern guitar music is more likely to inspire gentle, bucolic swaying in a field than any sort of kerfuffle. But wielding a guitar as if it’s a magic wand with new tricks left in its mysterious marrow? Yes, that still packs a punch.

Marnie Stern is one such wiz. After mum told the New Yorker to rock up her folksy pop many moons ago, Marnie grabbed the gauntlet and began picking out riffs at such breakneck speed, shuffling notes like a croupier attempting to blindside gamblers, that she’s now something of a guitar hero. Hers is a virtuosic punk rock – if there is such a thing.

But Marnie’s dotty synesthetic music, beloved of Animal Collective, The Flaming Lips and guitar magazines, will always be something of a niche thing. And at 37 she still tours on a shoestring and holds down other jobs.

And that, in essence, is what this fourth album is all about: carry on or abandon the dream? Even listening with ear half-cocked the answer sounds resolute.

The way Marnie plays is fresh, but she does hold true to some central tenets of rock’n’roll in her fizzing songs: invincibility and defiance.

This is never clearer than on Proof of Life when she moons over whether it’s worth all the effort before declaring: “Hell yes, all I’ve got is time.” Take that, destitution.

Four albums in, then, and Marnie has found a way to carry on doing what she does best and after a few more bruises that’s by flexing some muscle, as on the gnarring You Don’t Turn Down.

The rest of this jugular-slashing record – propelled by Oneida drummer Kid Millions – is by parts playful, dizzying, cloud-busting and, perhaps more so than ever before, serious. Not “I’m all out of luck” serious, just more carefully put together.

There’s far too much hope and spirit ricocheting around The Chronicles… to imagine she’ll give up now. 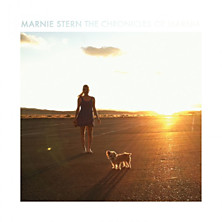