Emmy the Great and Tim Wheeler This Is Christmas Review

The weather outside might not be frightful just yet – at least, not through this window – but there’s no doubt that it’s on the turn, and soon enough that fire will come into its delightful own. And what better soundtrack to snuggle by is there than one of countless seasonal selections doing the rounds right now? Take your pick from traditional carols, wintry pop favourites dressed up in trendy threads, or perhaps something a little fresher: This Is Christmas is a predominantly self-penned set from Emmy the Great and her Ash-fronting fella Tim Wheeler. It layers on the schmaltz but stops short of choking the listener with sentimentality by revealing a wickedly singular wit and some snappy expectations-eschewing cuts. Really, who else would write a song called Zombie Christmas other than these two?

Nobody, exactly, which gives This Is Christmas its necessary quirk-factor and standout USP, setting it aside from the rudimentary covers approach favoured by others this year: amongst those flogging festive collections right now are She & Him, Michael Bublé and Justin Bieber. This is, categorically, the only album on which you’ll hear the lines: "I don’t wanna have my last Noël / We’d better kick those zombies back to Hell". It’s also the only album where a song about Santa’s despondent wife being left home alone while other lovers are united at Christmas – "Go spread your happiness around the globe / But you should know / That I won’t wait for you / You’ll have to get a new Mrs Christmas" – rubs shoulders with a Weezer-does-Yuletide-styled number by the title of Christmas Day (I Wish I Was Surfing), which finds Wheeler playing to his pop-punk strengths while Emmy coos delightfully in the background.

Originally taking the name Sleigher for this project – why, oh why, did the pair not keep it? – Tim and Emmy began working on This Is Christmas while snow-bound in Sussex last year, and wrapped things up during the wet weeks of August. It’s been put together with a great degree of care, every little swell of strings positioned for maximum impression, every entwined vocal a thing of either delicate beauty or boisterous fun. Sleigh Me – oh, be still these pun-tickled sides – is the first song they penned together, and it’s the kind of sweet-hearted duet that resonates with palpable feeling, as befits a piece performed by real-life partners. So while there’s humour aplenty here, This Is Christmas has its heart in the right place: wrapped up warmly on a hearth rug, waiting for Jesus the Reindeer to crash into the chimney stack. 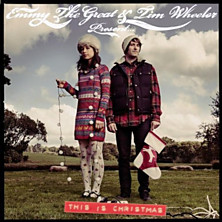