So can the ‘undisputed queen of German Soul’ convince soul lovers the world over of her talents? Judging by Joy Denalane's new album it would be surprising if not. The ingredients are surely all there: real soul songs, strong production and a confident, strong voice (thankfully she never feels the need to overdo it as some other R 'n' B vocalists do).

In her native Germany Joy is a star. Her debut album resulted in hit singles, awards and sell-out shows. Her eyes firmly on the international market, Joy has now switched from singing in German to releasing her second album in English. There are a few collaborations with big US names, but not too many to suspect these are just there to boost sales: opening track "Change" features US rapper Lupe Fiasco and Raekwon is featured on the remake of his track "Heaven or Hell".

Recorded in Philadephia and featuring musicians who have worked with artists such as Bilal, Musiq and D'Angelo, the album has a lot of neo soul credentials, but the real root of it all lies in Joy's love for hip hop soul and more specifically, Mary J Blige. In "7 Year Itch", for instance, Joy directly addresses her idol (‘Mary, sing a song for me’) to help with relationship problems. Mary J gets name-checked again on the album's title (and stand-out) track. "Born & Raised" is Joy's story about growing up as a mixed race girl in Berlin (her father is South African and she is incidentally the niece of jazz musician Hugh Masekela) and finding her own calling as an artist when she discovered hip-hop soul.

Whether Joy’s name is widely enough known to make the cross-over remains to be seen, but on this evidence she has what it takes. Born & Raised pushes all the right R ‘n’ B buttons. But you can't help but think that the best is yet to come for someone this talented. 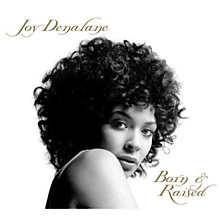