Broken Social Scene You Forgot It In People Review

We've been waxing lyrical about the Canadian music scene for a while now, and it's great to see a scene that continues to go from strength to strength while refusing to compromise for a few sales or features on MTV.

Toronto is no exception and while it certainly has had some rather...shall we say, interesting moments, the local indie scene is as powerful as ever and its new leaders are without a doubt Broken Social Scene.

Hailing from all the Toronto area, the band has its origins in an experimental indie project called KC Accidental which saw two releases on the excellent Noise Factory Label. Founder members Kevin Drew and Charles Spearin then formed Broken Social Scene which moved to more abstract territory.

After a few gigs in the Toronto area, they attracted the attention of musicians from fellow local bands like Do Make Say Think, A Silver Mt. Zion and before you knew it - a Canadian tour de force was born. This second release from the collective sees a slight change in the overall sound and direction of the project.

Where the band before created ambient oriented instrumental indie rock, You Forgot It In People sees a progression to 'proper' songwriting with a more defined verse/chorus/verse style. The new sound encompasses all the experimentation and looseness of their previous releases but takes it to an entirely wonderful new dimension.

Imagine Godspeed You! Black Emperor actually writing coherent pop songs or if Sebadoh decided to jam with about 20 other musicians from labels such as Sub Pop, Kranky and Thrill Jockey on some prog rock covers. But...you can imagine this almost on Top 40 radio. It's that good.

The CD begins with "Capture The Flag", a gorgeous blend of guitar and trumpet based ambience and then kicks in to the aptly titled "KC Accidental," a wonderful uptempo experiment in almost indie noise and it doesn't let up from there.

It ebbs and flows with gracious highs and awe-inspiring lows, twisting and turning with alternating male and female vocals, drum machine fills, banjos and even glitchy CD samples. The band refuse to let go of their delicate song structures and beautiful hooks no matter how many layers they decide to throw on, or which of the four guitarists happens to switch instruments mid-song.

As with most great things, Broken Social Scene have come around almost by accident and releases this good usually signify an imminent split (remember MBV's Loveless, anyone?). So far, the band have done a handful of shows in North America where they have been lauded with almost fanatical praise and a dedicated following to boot. Make no mistake, this is THE band of 2003 to watch and if you enjoyed their previous material, this will simply blow you away.

Get it now, before all the attention disturbs the pristine beauty of this wonderfully remarkable project and the band break up, becoming nothing more than a distant memory of better times. Absolutely, utterly essential. 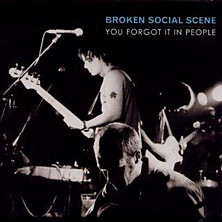