Songs blessed with a wry and dusty charm, but Dylan is too often on auto-pilot here.

The arrival of a new Bob Dylan album is usually heralded by convoluted pomp and ceremony. While such anticipation is often inversely proportional to the finished results, such declarations on the maverick from Minnesota’s continuing genius are really about acknowledging a lifetime making music.

And so it is with Tempest. Like its predecessors, this set’s pace and style is informal and, in most respects, largely unremarkable beyond the grizzled patina of Dylan’s rasping delivery.

Songs come and go in hazy cloud of fashionably bedraggled blues- and country-derived tunes. Though all are blessed with a wry and dusty charm that’s hard to dislike, too many are rolled out in a way that seems more to do with autopilot than passion. Narrow Way and Duquesne Whistle mighty be jaunty toe-tappers but they’re also examples of the lightweight fluff that blows around the album.

Dylan’s penchant for the perverse manifests itself during the title track, a plodding account of the sinking of the Titanic that makes William McGonagall’s infamously awful poem, The Tay Bridge Disaster, seem a paragon of good taste and eloquence.

Though Dylan’s got plenty of form for taking 13 minutes to say something that could be said in less than half that time, this is an exceptionally mawkish dirge. Much like a passage on that poor benighted vessel, it’s something that’s probably best avoided if at all possible.

There are, however, a few dark and brooding corners where Dylan’s powers are thrillingly undiminished and clearly in rude health. Scarlet Town’s hypnotic intensity drips sweat and menace, whilst the raggedy Cajun-infused lurch of Early Roman Kings conjures a swaggering procession of characters every bit as entertaining as they are dangerous.

Though it doesn’t win any awards for originality, Tin Angel expertly illustrates a tautly-drawn lover’s triangle. Richly atmospheric, Dylan expertly rotates the perspective of each doomed participant around the woozy sultriness of Tony Garnier’s acoustic bass.

The closer, Roll on John, poignantly comments on John Lennon’s passing while avoiding sentimentality, striking up an impressive and often beautiful valediction. It comprises a redeeming climax to what is, overall, a rather mixed Dylan offering. 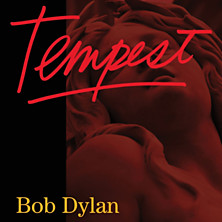