Ripe for re-evaluation, Ram is far from the disaster some critics painted it as.

Lennon loathed it – especially the arresting opening Too Many People, with its mild digs at John and Yoko – and even easy-going Ringo told Melody Maker: "I don’t think there’s one good tune on that one… He seems to be going strange."

Despite reaching No. 1 in the UK and No. 2 in the US, Ram received harsh reviews, with Paul perceived as the bread-head who broke up the group. Yet decades on, as is so often the way, the music has triumphed, the antipathy set aside. Now, the cool thing to say is that the 1971 album – McCartney’s second post-Fabs, his last before Wings, and the only one co-billed with Linda – is one of his best.

Its stylistic grab-bag makes a highly entertaining spree, punctuated with bursts of true genius. There’s little coherence – it leaps restlessly from grandiose to silly, as is Macca’s way – but the best moments are breathtaking.

The UK single The Back Seat of My Car stalled, astonishingly, at number 39, but it’s a textbook example of why it’s impossible to sneer at this master craftsman for long. Romantic, surging, loaded with melodic twists and dynamic swoops which rip your heart out while smiling innocently, it’s a career pinnacle from a golden, competitive era.

Mr and Mrs McCartney sketched the songs while on a "get away from it all" holiday in the Mull of Kintyre, and then recorded in New York and L.A. with swiftly recruited musicians. Linda serves as backing vocalist (though she comes to the fore on Long Haired Lady).

Paul’s voice throughout shows uncanny range: although the whole vibe tries to say not-trying-too-hard, he proved a few points to Lennon. There are a couple of R&B plodders (Smile Away, Monkberry Moon Delight), but Heart of the Country is all rustic charm and the brilliant centre-piece (and US single) Uncle Albert/Admiral Halsey is Abbey Road in microcosm.

Ripe for another re-evaluation, this reissue also offers rare/unreleased tracks, Paul’s orchestral version of the album, Thrillington, and that exquisite jewel, Another Day. Slaughtered at birth, Ram has lived on to fight. 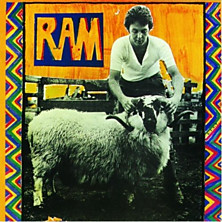