The first two songs on Turn On The Bright Lights are stunning. Guitars squeal, drums...

"Surprise sometime will come around" are the first words you hear when you play Interpol's debut album Turn On The Bright Lights. Surprise indeed when a band you've never heard of suddenly re-establishes your faith in the wonder of music. Surprise indeed when a four-piece from New York can stand out so vividly from the crowd; from all the other indie albums released this year.

The first two songs on Turn On The BrightLights are stunning. Guitars squeal, drums are beaten and vocals sung with mesmerising energy. The second song, "Obstacle 1", slowly builds to an expected climax but instead of the final roar the vocals are suddenly soft, sweet and soothing.

Yes, they're from New York City and they wear sharp suits but thankfully this isn't another punk or post-punk 'play it loud!' release. The music does sound very American; images of driving through North American cities, late at night in the rain come to mind. This album is more mature and more inventive than recent so-called punk bands. The songs are frequently manic and frenzied but just before you burn out they slow down and become melodious.

"I'm sick of spending these lonely nights, training myself not to care" cries lead singer Paul on "NYC";matching the miserable beauty that Radiohead master so well.

Two more great songs follow; "PDA" and "Say Hello To The Angels" have killer guitar riffs, relentless drumming and melancholic choruses. They're easily on a par with their apparent influences;early REM and Joy Division. The vocals are an important part of the success of Turn On The BrightLights. When Paul proclaims "Friends don't waste wine when there's words to sell", in "Obstacle 2", I'm not quite sure what he means but from his tone of voice I'm left with no alternative but to agree with him.

I'm reminded of several great bands and songs when I listen to this album but I find it difficult to pinpoint exactly which ones. Therein lies the secret to the power of this record. Interpol have absorbed several decades of great music and produced something familiar, yet fresh and new. Faultless. 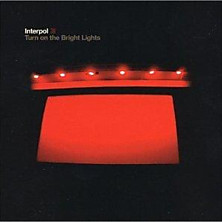