Rachel Stevens Come and Get It Review

Quite simply, it's the pop album of the year and a far cry from the wilting 'Funky Dory'.

Bold, Swaggering and Accomplished - three words you would perhaps not expect to hear when talking about Rachel Stevens; but these are fair comment when describing her sophomore album 'Come and Get It'. Quite simply, it's the pop album of the year and a far cry from the wilting 'Funky Dory'.

In 2005 dancefloor-driven electronic pop has dominated the charts. Goldfrapp have broken into the mainstream and become the success of the year in credible circles. Over in pop land Rachel has been adopting similar sounds and releasing songs that, if she weren't Rachel Stevens, would be lauded by critics everywhere.

But it's not just dancefloor stompers that the Stevens can do so well, two of the most memorable songs are the uplifting, minimalist 'I Will Be There', with production values reminiscent of Kylie's 'I Believe in you', and the sultry 'Nothing Good About This Goodbye', penned by Alexis Strum.

Nearly every track on the album could be a single, with 'Secret Garden' and 'The Cure's sampling 'All About Me' falling slightly short of the mark. But the strength of the other songs let us forgive her these. Come and Get It is quite simply a pop tour-de-force that deserves to sell a billion copies. Please, don't let this end up as a forgotten classic. 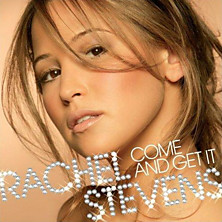