Julia Stone By the Horns Review

When Angus and Julia Stone released their debut album A Book Like This in 2007, they appeared to have landed from another world, apparently raised in the Australian woods amidst dream catchers and sing-alongs. Its follow-up, Down the Way, continued to mine both modern folk and the Carpenters, the siblings’ voices perfectly entwined. Seemingly unable to stop writing material, it has taken less-impactful solo careers to provide further outlets for their pastoral takes on the world.

As with 2010’s The Memory Machine, the reason for Julia Stone going solo is not made particularly clear by this offering. She’s still singing about California and its eternal summer of love, although she showcases a previously unheard maturity. Her voice occasionally overplays the shy card, but there is a new ambition to the arrangements. Producers Thomas Bartlett (The National) and Patrick Dillett (Mary J Blige) provide an edge that was hitherto lacking, with songs revealing themselves strong enough to have Alessi’s Ark and Laura Marling glancing over their shoulders.

The influence of The National stretches to a guest appearance from their drummer, Bryan Devendorf, and a cover of High Violet’s Bloodbuzz Ohio, which sets Stone in the unlikely role of gold-digger, as it swells to the most subtle of builds. There’s also established song-craft of her own: the flirtatiously catchy piano of It’s All Okay with shades of Steely Dan, while I’m Here, I’m Not Here is so fragile it’d be advised not to go out on a windy day.

So far, so pigeon-toed folk in the sand – but Stone knows how to busy the mix when pulses need to rise. I Want to Live Here drips with tropical intensity, while the swirling With the Light and the title track’s furious disbelief at a cheating boyfriend (“my hair was still on the pillow”) echo the fractured atmosphere of Feist’s recent Metals album.

But the elephant in the room is an absent one: By the Horns misses Angus’ gruffer harmonies offsetting Julia’s wide-open heart. Next time she might explore broader musical horizons (hinted at by a lush Active Child mix of It’s All Okay). This is more an intimate chat of an album, rather than house party fare, but it paves the way for a new collaborative album with her brother, promised for later in the year. 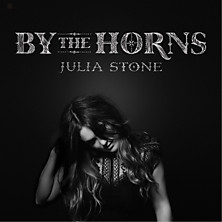