Catrin Finch's debut on the venerable Yellow Label offers an accomplished performance of her own transcription for harp of Bach's timeless Goldberg Variations.

First published in 1741 as an aria with 30 variations and originally composed for a two-manual harpsichord, the ever-amenable Goldbergs have been much and often treated (and occasionally mistreated) to a dizzying array of arrangements for everything, it seems, from jazz trio to woodwind ensemble, from accordion to chamber orchestra and, of course, modern piano forte.

Finch's arrangement is the first to transcribe all 32 sections for the concert harp, although the framing Aria has had at least one previous incarnation for the instrument, courtesy of Andrew Lawrence-King in 1998.

Using Canadian maverick Glenn Gould's recordings of the work as an initial point of reference – a controversial choice in itself – Finch approaches the work with an appreciable sensitivity for its cut-crystal brittleness and deceptively delicate simplicity.

Dividing the work into three sections – the first culminating with the first minor key variation, No. 15; the third beginning with the bright two-part toccata of No. 26 – Finch offers a moderately paced account that comes in at just under 64 minutes.

She adroitly side-steps what would seem to be the harp's principal shortcomings compared to a keyboard – the absence of a sustaining pedal and the lack of a damping device – with a nimbleness that quietly cossets and coaxes with its straightforward hand-for-hand transcription.

The work's several hurdles are cleared with clean, crisply articulated playing that eschews showy effect and strives for colour and tone. Which may be where some are inclined to step away from this performance. If the harp is an acquired taste for you, there is much here that might entice and encourage you to stay, but the relatively limited tonal palette will not be one of them.

Finch proves a dexterous negotiator of the fifth variation's hand-crossing gymnastics (partly by choosing to measurably slow down its rapid pace) and, most conspicuously, the teemingly chromatic, darkly lustrous texture of the Black Pearl variation (No. 25). The two renditions of the Aria are sublimely pristine and intimate affairs. 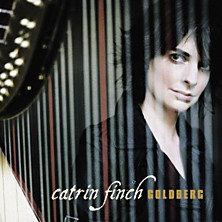