A stars-bound journey away from the drudgery of everyday ordinariness.

Space and funk: somehow the two have long gone together. It’s probably something to do with George Clinton, of course – but from Mothership Connection through to Daft Punk’s Tron: Legacy score, sci-fi themes have effortlessly permeated the squelchiest basslines.

Belfast-based producer Jack Hamill has traded in a high-quality strand of galactic funk since first appearing on release radars as Space Dimension Controller in 2009. His debut album proper is chunky, retro-futurist fare, complete with an entirely befuddling narrative.

Which can be largely ignored if the gruff-voiced Mr. 8040 – the titular Space Dimension Controller, and a character that Hamill has previously completed e-mailer Q&As in the guise of – is an off-putting presence. Conversations this writer has had with peers suggest it can be.

His exchanges with other, secondary figures progress the story of Welcome to Mikrosector-50, but if you’d rather get on with the getting down, the R&S Records website provides a succinct summary of his (mis)adventures.

Hamill is obviously close to his creation – “If I could (do the character in person), I would,” he told The Quietus in March 2012 – but surely won’t object if listeners focus on what surrounds Mr. 8040’s moments in the spotlight.

As they should, because from the shimmering, almost Don Henley-recalling 2357 A.D. (listen, and tell us you don’t hear Boys of Summer in there) to the comparably sublime Closing Titles, Welcome to Mikrosector-50 is full of standout moments that demand repeat plays.

With several cuts running for over seven minutes, Hamill lets his designs evolve steadily – these tracks rarely rush the listener from the first second. As a result, Confusion of the Armament Moon and Rising become hypnotic experiences, capturing the senses within Mr. 8040’s world of lost colleagues and shady, substance-rife nightclubs.

Everything is sequenced so that, like all good stories, there’s a distinct beginning, middle and end. In another dimension, this is the soundtrack to a high-budget sci-fi romp. In the here and now, it’s a great escape from the drudgery of everyday ordinariness, a rollicking ride on one seriously funky UFO. 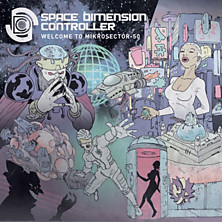