Seventh Tree is a voyage worth taking in the unique universe of Goldfrapp.

Not many of us could spend the best part of two years perving around to retro-futuristic electro kink-pop with horseheads in killer heels. And so it's come as no surprise that after having done such with their last album - the amazing Moroder-meets-Weimar glittering sauce-fest that was 2005's Supernature - that Alison Goldfrapp and Will Gregory have opted for a more relaxed and even - crikey! – vaguely organic sound on the follow-up.

If Supernature was the slightly hardcore night before, then Seventh Tree is the post-coital, pre-shower (late) morning after. Out goes T-Rex and disco, in come folky guitars, wheezing vintage parps and harps. Informed by Edward Lear, The Wicker Man and early Pink Floyd, it's leaves and owls and the mildly psychedelic. A dazed wandering through a field and greeting squirrels-type situation, if you will. It's also a move that few who came in during the last album would've imagined, but in the grand scheme of all things Goldfrapp, it makes perfect sense.

Opener, Clowns, captures both the eerie stillness and magic of nature, which counterpoints the subject matter of breast implants and surveillance magnificently. The far-out kicks in on the poptastic Caravan Girl, which is a bit like running naked through a cosmic soup, and the fluttering mellotrons of Little Bird show up the likes of Oasis' ham-fisted attempts at psychedelia. Meanwhile, A&E is one of the best singles the band has ever released, a dreamy hospital-themed jangle with lines like ''in a backless dress in a pastel ward''. It erupts halfway into magnificent power-pop. With its sweeping strings Cologne Cerrone Houdini has a slight Emmanuel flavour - all soft-focus erotic suggestion - and Happiness and Some People are further proof of the duo's growing songwriting genius and pop nous.

Seventh Tree is a voyage worth taking in the unique universe of Goldfrapp. Quite how all those who've 'borrowed heavily' from them are going to take it is up to them, but it's a stunner, and displays a further leap for the 'Frapp towards national treasure status. 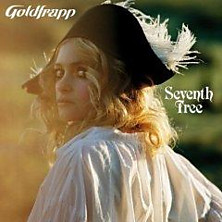