An album of fragility and ethereality to relax into whenever stress levels peak.

A product of New York’s Tisch School of the Arts, Brooklyn singer-songwriter Lia Ices is a talent worthy of comparison to The xx. Both have roots in studied composition, with the Mercury winners first exploring their craft while at London’s Elliott School; and both now create music that is restrained and regal, all shadows and glass, fragility and ethereality.

The two are not exactly soundalikes – there’s more of the Cat Powers, St Vincents and Glassers of this world about Ices – but the trajectory they ultimately take could prove to be similar. The xx have broken the mainstream, but it took time. Grown Unknown, Ices’ second long-player and first for the Jagjaguwar label, gradually creeps into the system, slipping under the skin, infecting the blood. It might well be one of 2011’s finest sleeper hits, a record that finds its commercial stride a little down the line, perhaps courtesy of a well-placed sync (there’s potential aplenty). Time will tell. For now, it’s likely to be heard, and loved, as an individual’s special secret, an album to share only with those closest.

Where so many female vocalists fronting arrangements of shimmering synths and warm textures can become too detached from the terrestrial realm, harmonising into the ether rather than anyone’s soul, Ices’ approach is pleasingly direct. Her words are delivered clearly, and she’s not afraid to lay out her feelings for public analysis – the packaging contains sing-along-at-home lyrics. There are some predictable-enough adventures in ambiguity and commonplace metaphor, but while lines like "I’d hate to leave you while we still combine" (Ice Wine) and "Exhale your spirit poem" (Bag of Wind) are clunky on paper, they’re never anything but affecting on record.

There are deviations from the celestial template – but none so dramatic that they upset the flow of these nine songs. The hand-clapped intro to the title-track stirs thoughts of The Knife, and the bells and autoharp of After Is Always Before, combined with marching percussion, shift the mood to a rather more excitable state. But everything sits comfortably in the presented sequence, and the one guest vocalist, Bon Iver’s Justin Vernon, acts as more of a back-up singer than a duet partner on Daphne.

Like Vernon’s For Emma, Forever Ago LP, much of Grown Unknown was recorded far from the bustle of city living – in this case Rhinebeck, with a population of around 4,000. And its maker’s escape from the hubbub is perfectly captured, sonically – (basic) space explored and conveyed. An album to relax into, over weeks and months, this is one many will be coming back to whenever stress levels flit into the red. 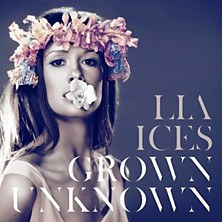