Usually, the Wiltshire keyboardist Matthew Bourne is heard in a combo context, habitually making music of a more violently improvisatory nature, hunkered down with elements ripped out of dance music, rock and abstract electronica. That’s just the kind of sound that might be identified with The Leaf Label, but with his debut recording for them, Bourne has confounded expectations.

Montauk Variations is primarily a collection of completely solo acoustic piano pieces, sometimes augmented by strings. Bourne is known in jazz circles, but this project also emits an aura of modern classical composition. Often a dense sprayer of notes, the pianist is found here in a sparse, spacious state, lyrical and romantic. It’s all inward, to the max. Several pieces are personal dedications, and the mood is mainly solemn. Bourne’s manic side is kept in check. There are 16 Variations, many of them quite brief, and Charlie Chaplin’s Smile arrives right at the close.

This is not to say that there isn’t any tension. Even if the listener might be drifting in a meditational cloud, the transition into a new Variation can sometimes produce a startling jump into another sonic realm. Calm might give way to trebly shards, then stillness will pervade once again. These shifts in nature are just as crucial as the actual musical contents of each piece. The album demands to be heard in a single sitting, in a contradiction of the digitally shuffling age. Faint caresses become jarring jolts; the listener is repeatedly yanked out of any hazy reverie.

Etude Psychotique is dedicated to John Zorn: a single minute of high-speed rippling, after Cecil Taylor. Hands dampen the bass strings on Within, a close-miked exploration of piano innards; Bourne is also slapping the exterior frame. Next, he’s plinking at the high end, but still rubbing away inside, with a block of wood, or a strip of metal. Near the disc’s end, a string section thickens the atmosphere, and the mood becomes more composed. The best tune on the album is Knell: a halting, bluesy kind of creation. The entire experience acts as a portfolio for Bourne’s talent and technique, but it’s still a sequence that coheres with a true oneness of spirit. 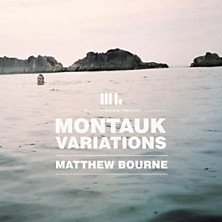