Lyrical, romantic and highly Jewish-sounding, the music of Swiss composer Ernest Bloch feels tailor-made for cellist Natalie Clein. Small wonder that this programme of his key works for cello is so successful.

Schelomo, his 1916 Hebrew Rhapsody for cello and orchestra, makes for a powerful start to the disc. Urgent and frequently virtuosic, this deeply lyrical work depicts sumptuous material riches alongside deep inward despair in its portrayal of the book of Ecclesiastes, the cellist cast as the voice of King Solomon (“Schelomo” being the Hebrew for Solomon), with the orchestra representing his internal world and experience of life.

Those familiar with Ecclesiastes won't be surprised to hear that Bloch said of Schelomo, “Almost all my works, even the darkest ones, still end optimistically; or at least with some hope. This is the only one that concludes in complete negation.” How could it not, with Solomon's conclusion on life being that “all is vanity, and a striving after wind”? Clein digs deep into this psyche to produce a strong-toned, deeply felt interpretation, delivering effortlessly rhapsodic flow in the highly virtuosic passages, whilst convincingly colouring in the spiritual elements.

This is particularly apparent as we move on to Prayer, the first movement Bloch's shorter 1924 work, From Jewish Life. Originally composed for cello with piano accompaniment, it's heard here in Christopher Palmer's beautiful arrangement for string orchestra and harp, and is movingly played throughout with deep feeling.

Bloch's symphonic poem Voice in the Wilderness is the other main work on the disc, and gives Clein and the orchestra opportunity to explore every possible dynamic and emotional contrast, which they do to great effect. Indeed, one of the pleasures of the recital is the meeting of minds between orchestra and soloist, each perfectly partnering the other.

After a highly Jewish set of works, the fascinating coda to the disc is Bruch's Kol Nidrei. As Jewish in sound as Bloch's works, his themes based on a German synagogue chant and a part of a psalm setting of Psalm 137 by the Anglo-Australian Jewish composer Isaac Nathan, the joke is that Bruch was not only not Jewish, but was descended from a long line of Christian clerics. It's a lovely piece of programming, tenderly performed. 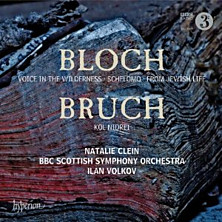