A complaint-cum-observation surrounding the ascendance of certain musicians is that it’s not what you know but who you do that counts. This is, mostly, nonsense: few artists attain wide exposure without some ability, be it innate or imposed upon them through conditioning. So one can sympathise with fashion model Karen Elson for having reservations about recording songs she’s written since 2005, following relocation from New York to Nashville with her husband. That husband: a certain Jack White. Those shrill sounds: cynics sharpening their blades before giving The Ghost Who Walks a chance.

White’s presence cannot be ignored – he might be behind the kit, but the bluesy guitar tones and rootsy ambience of some of these arrangements bear his influence. He also acts as producer, so has had a substantial amount of input in shaping the end result. But this should not detract from the talents of our headliner, as Elson clearly has an astute ear for lilting melodies and a clever lyric. She sings with a comfortable confidence, an attractive Cat Power-like huskiness pervading pieces like Pretty Babies and The Birds They Circle; but never does she steal the limelight wholly. In this respect, The Ghost Who Walks sounds more like a full-band record than a solo affair – perhaps a result of the stellar cast assembled. Among the performers are The Dead Weather’s Jack Lawrence and My Morning Jacket’s Carl Broemel, and also present is Meg White’s husband Jackson Smith, son of Patti.

At its best, The Ghost Who Walks effectively distils the key sonic characteristics of its various contributors. A Thief at My Door is a country-tinged tale of love deliberately ducked out of; The Truth Is in the Dirt features some splendid organ work, colouring the gaps left between six-string shrieks; and Stolen Roses brings an accordion to the fore, lending a traditional folk air to lyrical explorations of relationship misadventures. Even during its less-memorable moments, this is an album that maintains its atmosphere, and Elson is an engaging narrator (although there’s no trace of her Oldham roots to be heard). But one question looms large: would this record have been made – or, more pertinently, would it be such a high-profile release – without the association with Elson’s husband?

Maybe, maybe not. That she needed to get these songs out, and that they ultimately deserve to be heard, is all the answer that’s necessary for now. 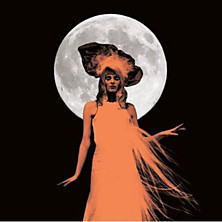