Artful Canadian quartet Women’s self-titled 2008 debut showed much promise, but for many ears was probably a little too heavy-handed in its marriage of melody and abrasion. It bristled with nervous energy; a touch overzealous in its use of noise, distortion and fuzz, and often shy of delivering a chorus.

Whether the band were unwilling to let their populist side shine through back then, or, perhaps, the love of The Beach Boys and The Zombies apparent on Public Strain is more of a recent development, the follow-up positively basks in a melodic glow. It’s the sound of a band loosening up and broadening their sonic palette into a much more powerful, cohesive vision.

They’re not the first to make such an impressive transition. Their closest modern contemporaries in that respect are undoubtedly Atlanta’s Deerhunter, who also display an interest in the cross-pollination of similar genres – principally shoegaze, noise, Krautrock and pop. Clinic and Liars also provide obvious reference points here.

Though there are certainly echoes of all three across Public Strain’s tracks, Women look back as much as forward or to the side: their entire modus operandi (mixing light with shade, noise with pop) was pretty much invented by The Velvet Underground as far back as 1967. What’s key, though, is that they’ve (mostly) absorbed these influences without parodying them, taking what they want from each and distilling it into something new.

There’s a real flow about Public Strain as a result of this coherent approach – it might lurch from one mood to the next, but a clear focus is retained throughout. Singer Patrick Flegel delivers deadpan incantations swathed in reverb (and deep in the mix, as ever) on opener Can’t You See – struggling to let go of the Women of old, perhaps – before Heat Distraction’s motorik thump subsides into passages of true melody brilliance. Narrow With the Hall just about stays the right side of eponymous-era Velvets pastiche (if you’re going to rip anyone, though…) before a naked ballad, Penal Colony, segues into Bells’ slow ambient drone, evoking a nightmarish, sepia-tinged horror film score. And that’s just the first five tracks – don’t be surprised if it takes a few listens to take it all in.

If you’re not quite there by the time six-and-a-half minute opus Eyesore encapsulates everything that’s been wonderful about the preceding 36 before slowly fading out, turn it over and start again. It’s worth it, because Public Strain is one of 2010’s finest LPs. 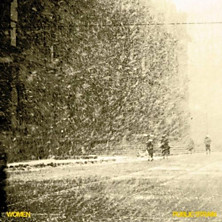