This sixth album effectively runs the SMZ gamut to date.

Stumbling woozily into the sunlight come Montreal’s Thee Silver Mt. Zion (Memorial Orchestra, for this outing), clutching a battered shoebox to their collective chest, the contents of which – yellowing papers, faded photographs, odd buttons and brightly-coloured bottlecaps – make up this, their sixth full-length in some ten years.

Despite being shorn of their Tra-La-La Band and having undergone their umpteenth or so line-up change, the weft and warp of the band’s sound in nevertheless reassuringly intact. This is another tippy-toe step forward in a strange journey that’s seen them steadily chart a course beyond the ubiquitous post-rock tag to take in orchestral pomp and clattering psych-outs as they forge some sort of hairy, woebegone chamber music for an indie set raised on Dirty Three and The Black Heart Procession. Or, at least, one that’s been secretly harbouring hopes for a twisted carnie cousin to Arcade Fire’s happy-clappy viola stomp.

Comprising four modest six-minute pieces and a slender interlude bookended by two more expansive 15-minute workouts, Kollaps Tradixionales effectively runs the SMZ gamut to date, hinging upon de facto leader Efrim Menuck’s strangulated vocals and febrile guitar whilst all around him whinnying strings soar and surge, drums pound like a vast cetacean heartbeat and strange, elemental noises are wrung from the rafters. The atmosphere is rarely anything less than electric as the band is led like a drunken, rag-clad choir through hymnal chants and crooked round-robins.

Unassuming opener There Is a Light eases you in with gentle hands, Menuck’s quavering vocals and shaky guitar line lighting a lamp for lush, doleful strings to follow so that by the time the clangour has risen to a roar you’re barely aware of its pressing weight and couldn’t quite say from whence it arose. Elsewhere, I Built Myself a Metal Bird, with its insistent Neu! pulse, rousing brass and climactic strings, could perhaps be the band’s most straight-laced effort yet, while ‘Piphany Rambler stretches and sprawls around itself, heaving, swaying and swooning before blowing itself – and the album – out in a mournful wash of white noise and pure sonic abandon. 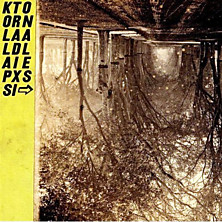