Moments of brightness lend an unexpected brilliance to this soundtrack.

There is an art to the great film soundtrack, a subtle kind of weaving that ensures the music leaves itself as firmly embedded in one's memory every bit as much as the movie's plot or characters. Think Simon and Garfunkel's scoring for The Graduate, Elliott Smith's songs for Good Will Hunting, and O Brother, Where Art Thou? single-handedly launching some sort of great bluegrass revival.

It's an art T-Bone Burnett knows well, having produced not only that very O Brother soundtrack but also ones for Johnny Cash biopic Walk the Line and the Coens’ Ladykillers remake. For Crazy Heart he worked with musician Stephen Bruton (who sadly died earlier this year), and the movie finally scored Jeff Bridges an Oscar for his role as Bad Blake, a down-and-out country singer spurred on to resuscitate his career by the love of a good woman.

The 23 tracks here include heart-worn classics – contributions from the Louvin Brothers, Townes Van Zandt, Lucinda Williams, and Lightnin' Hopkins – and more contemporary fare, including tracks by Texan songwriter Ryan Bingham and a duet and a solo effort by Colin Farrell. And then there are the songs by Bridges himself, ranging from the rambunctious to the pliable and all revealing a voice that is warm, creased and unshaven. He's at his finest when the music isn't quite so rollicking, singing Greg Brown's Brand New Angel, for example, and pitching it somewhere between Waylon Jennings and Leonard Cohen. The final track here is The Weary Kind, the song Bridges's character writes through the movie. In truth it was composed by Bingham and Burnett, a bar-scented tale of dice-rollin' and pool-shootin', truck stops and whiskey. It’d be horribly clichéd if it wasn’t for the throaty desperation in Bingham's voice and a certain cold, lost sadness to the instrumentation.

As an album, Crazy Heart is something of a little girl with a curl. At times it can settle too readily into a kind of country chug, and one begins to feel stuck for too long in a dusty, last-breath pick-up on some interminable road trip. But when it is good, it is very, very good – the earthy, salty taste of Lightnin' Hopkins's Once a Gambler, the light sweet touch of Robert Duvall singing Live Forever, and the sudden and surprising twist of a track by the Tejano queen Lydia Mendoza bring a brightness and an unexpected brilliance to this soundtrack. 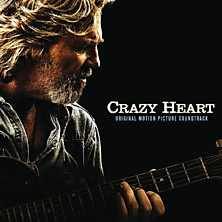