Remember and celebrate the finest band of their generation this way.

When Blur announced their first sort-of comeback show in December 2008, Christmas had come a little earlier for the fans who'd pretty much abandoned all hope of ever seeing Damon Albarn, Alex James, Dave Rowntree onstage with Graham Coxon again. As luck would have it, many more people felt the same, with such demand paving the way for a full summer of festival engagements.

Originally forming in 1989, they released their first single a year later, during the baggy debris of late 1990 and, being amazingly haired and not completely ugly, they managed to charm their way into Smash Hits and the Top Ten with second single There's No Other Way in the Spring of 1991. Gloriously chaotic and spectacular booze-hounds, their debut album Leisure barely hinted at what was to come.

It was after being battered by America, that they released their first masterpiece with 1993's Modern Life Is Rubbish, which established them as worthy of being mentioned alongside their heroes. Parklife followed a year later, sold millions, altered indie and went on to scoop up almost every award imaginable. Then in 1995 the joy soon began to unravel with the flawed The Great Escape; so they fled to Iceland and recorded possibly their best album yet with the self-titled and noisier Blur, following that in 1999 with the more far out 13. Then Graham left before making their last album, 2003's Think Tank.

This collection is designed to offer a broader spectrum of what made Blur Blur, having already released a Best Of in 2000, which detailed the singles end of the operation. Midlife is designed to showcase some of treasures found amidst their seven albums such as This is a Low, Trimm Trabb, He Thought of Cars and Advert and is closer to what the band and their fans would select as highlights. So basically there's no sign of Country House, in case you were wondering.

Instead singles such as the sublime Beetlebum, saucy Girls and Boys, Parklife (naturally), modern-day classics such as Out of Time, the Universal and the ever-delectable For Tomorrow figure. And Midlife also offers a rare first-time-on-a-Blur-album sighting of the magnificent 'lost' single Popscene. There's probably one or two missing – one personally hoped Mr Briggs or Young & Lovely might sneak in – but it's a small nag in the bigger scheme of things.

Are they back for good? Who knows. But for now, remember and celebrate the finest band of their generation this way. Essential stuff. 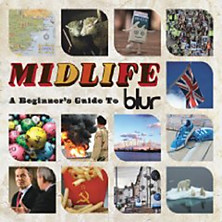