One hopes this inspires a new generation of investigative listeners.

It’s hard to believe that five years have passed since the death of John Peel. Hard because, in many ways, it’s as if he’s still with us, so inspiring was the DJ to legions of music lovers in the UK and far, far beyond. The records he played seeped into the minds of young men and women, who years later found that the roots laid by late-night radio sessions had sprouted into magical new musical shapes.

To properly cover the breadth and depth of material Peel played on his Radio 1 show over almost 40 years would probably require 400 discs, but this four-CD set at least manages to convey some sense of the man’s eclectic tastes. He wasn’t always right with his recommendations, but at least he gave the bands in question a chance – there aren’t any DJs active today with quite the same ear for both the blissfully sublime and the stupendously bonkers.

Kats Karavan essentially presents four show-style mixes, with selections from the 60s and 70s, the 80s, 90s and 00s. Between certain songs up pops Peel with some words of wisdom, endearingly fumbling his lines occasionally, which does sometimes transport the listener back to those days of listening intently to every tiny detail about this limited-run seven-inch that was, apparently, so very amazing. There are well-known names and many which will be entirely new to many: Traffic and Free appear on the 60s/70s disc, rubbing shoulders with Deaf School and The Fabulous Poodles; on the latest, 00s mix, Bloc Party and Yeah Yeah Yeahs appear alongside Ball Boy and Bearsuit.

Though the material is largely of an indie/rock slant, there are tracks from The Orb and Stereolab on the 90s disc, and Aswad on the 60s/70s, showcasing the variety Peel offered. The most out-there arrangement though is Bong Ra’s frenetic Archie Bunker Disciples, which sounds like a broken Aphex Twin 33 played at 45, backwards, through an over-driven amplifier. Basically like a really angry Prodigy, then.

While it was never going to be comprehensive, Kats Karavan does paint a fairly accurate audio portrait of one of the nation’s best-loved radio DJs. One hopes that the surprises contained within its intriguing tracklisting inspire a new generation of investigative listeners to get searching for new, often singularly brilliant sounds. 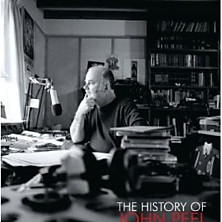