John Maus We Must Become the Pitiless Censors of Ourselves Review

Maus has given his skewed, 80s-inspired synth-pop some almighty new hooks.

He’s a clever man, John Maus. The Minnesotan’s intellectual arsenal includes degrees in music and philosophy, and he recorded this third album while taking a PhD in Political Science. He’s as much a professional existentialist as he is a synth-pop musician – sorry, composer – and reading his interviews can make your cerebral cortex pulse with befuddlement. And now this: an album that places him at the heart of a discussion about pop eating itself; about how, according to writer Simon Reynolds, pop music is mired in the past and going nowhere fast.

Maus, who’s been making music for 20 years now, doesn’t agree. It’s more likely that he shares Rob Young’s outlook. In his book about British folk, Electric Eden, Young posits a theory that visionary musicians learn from the past to imagine a different future. And while the future conjured up by Maus isn’t exactly a utopia of clean energy, daisy chains and loon pants, he does use old tropes to fashion something intoxicating and slap-in-the-face fresh.

For a start, We Must Become... will put fewer teeth on edge than Maus’s first two (proper) albums, Songs and Love is Real, did. Just like his old collaborator Ariel Pink managed on his latest album, Maus has given his skewed, jarring, 80s-inspired (The Human League, Gary Numan, Giorgio Moroder, et al) synth-pop a lot of almighty hooks – towering concrete ones that suggest the sound of a 22nd century steel-plated Soviet Bloc – as well as some very old ideas.

It’s an almost absurd mix – a stand-off between taut, bass-driven post-punk, whooshing electro-pop and, thanks to the chants and bleak intoning, Medieval and Gregorian disco. So absurd that aside from tenderly anthemic closer Believer, which sounds like The Horrors in three albums’ time, and the Haunted Graffiti-like Hey Moon, this is dominated by tension and humour. Maus’ deep vocals are more dramatic than a Morrissey hissy fit; the synths, when not phasing and whooshing in pristine arcs, sound as if they’re doing battle with each other (Matter of Fact); Numan’s OTT darkness sits happily next to disco doorbells on Head for the Country; and We Can Breakthrough’s incantations are both Patrick Bateman creepy and agreeably pompous.

So wonderfully compelling is it all that it’s easy to miss how seriously impassioned Maus can be – especially on Cop Killer, inspired by Body Count’s song of the same name but about freeing ourselves of our own inner-cops. But as distractions go, taking one step back, several forward is a welcome one. 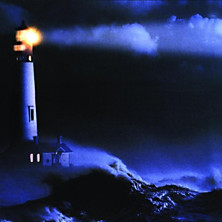