Dobie We Will Not Harm You Review

Dobie was a skateboarder and photographer in the 1980s, before his involvement with Soul II Soul led to work with Massive Attack, and remixing duties for Tricky, Björk, Warren G, Neneh Cherry and Bomb the Bass.

His first album, which emerged in 1998 at the back end of the trip hop wave, comprised passable hip hop and forgettable chill out ballads, while 2004’s The Sound of One Hand Clapping Version 2.5 was somewhere between a re-release and a remix album.

Although it’s not perfect, We Will Not Harm You is a significant advance on those previous efforts.

Eschewing the politeness of his earlier work, Dobie seems to be at his best when throwing disparate elements into close proximity. It’s a catchall sound operating within that most catchall of categories: UK bass music.

When it works, as on the single She Moans, radical changes in tone possess a strange logic: pulsing Latin percussion breaks into the rawest of drum’n’bass rhythms, before a rapid, almost classical piano line establishes a moment of fidgety delicacy at the track’s heart.

This mixture of sounds is uncommon, but Dobie’s fusions often stay too close to convention. Crunch Factor No.5 apes the Stereo MCs' late-80s sampling of Ben E King’s What is Soul? and doesn’t suggest things have moved on much in the past 20 years.

The Chant is unremarkable jazz-flecked dubstep. The funk-fuelled drums of Snap, Crackle & Pop spark with energy, but can’t shake the ghost of big beat.

The scrappy bleep techno of Blip 124 is more impressive, as is On the Corner of Ridley Road (which alongside last year’s Gillet Sq N16 suggests Dobie’s side project is a sonic mapping of the London neighbourhood of Dalston). Here, rough city energy and melancholy interweave, a fragmented female vocal sample and restless kick drum skewing the track towards the brashness of UK Funky.

The best work Dobie has produced to date can be found on two EPs from last year, Nothing to Fear and …But Fear Itself, which mash rave, techno and breakbeat into something sticky and moreish.

His magpie style – a classically hip hop approach to production – sometimes has bland results, but the best tracks on We Will Not Harm You prove Dobie is capable of work that coaxes new flavour from familiar ingredients. 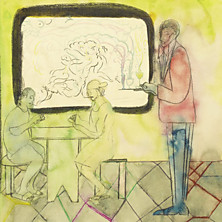