An album that has to be heard to be believed.

Now here’s a gap we didn’t know needed filling: between Nina Simone at her most stern, and The Beach Boys at their most baroque.

It’s a gap that Laura Mvula – composition graduate, supply teacher, Sound of 2013 contender – has decided to fill with her daring arrangements.

These are bliss-bombs of massed vocal harmonies, brave melodic excursions, and an entire orchestra playing only in fragments, when it really matters.

Tellingly, there’s no sign of either a piano or guitar – the songwriter’s traditional work tools – until five songs in, which does indicate Laura’s ideas are worked out bar-by-bar, rather than bashed out in a moment of inspiration.

In the quieter moments, it’s all about tiny details, a double bass heartbeat, a curlicue of brass, and the occasional tubular bell.

Then, every now and again, she lets loose a blossom of voices, throwing a dazzling display of kaleidoscopic light in all directions.

The single Green Garden is something of a red herring, being a curiously arid soul stomper, all handclaps and a celeste player who just won’t shush.

It’s still arranged with the hallmark Mvula short attention span, but feels shoehorned into a contemporary, Paloma Faith dress, compared to the questing oddness of her other songs.

Like the slow carousel of Can’t Live With the World, six-plus minutes of heavenly peace, garlanded with cherubs and sparkling harps. Or the stunning title track, which manages the rare feat of feeling unfettered and tightly bound at the same time.

And so it continues. Every song starts ornate and then strips away to nothing, or starts under the soil and shoots towards the sun.

The comparatively straightforward Father, Father, an uncluttered piano ballad, suddenly breaks into a chorale: one drum and a mass of voices, just to sing “let me love you” a few times before vanishing as quickly as they arrived. And that’s Laura at her most conventional.

Whether as the fanfare arrival of a unique new voice or the peculiar indulgence of a future cult classic, this is an album that has to be heard to be believed. 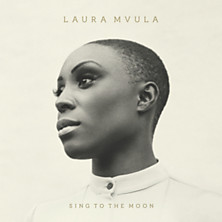