Henson’s stripped-back sound is almost shocking in its purity.

In this frantic Twitterworld, where all the genres of music are either mating with other genres, feeding on the past or searching for the next trending wave, Keaton Henson personifies the moment when time stops still.

It’s the almost shocking sound of one man and his gently stoked electric guitar, which flicks like the embers of a fire, as the singer’s voice glows in the reflected light, safe in his panic room.

Crippled by anxiety since childhood, to the point that he rarely goes out or plays live, the wondrously bearded Keaton is the archetypal tortured recluse who channels his emotions not into shopping or clubbing but his art: he’s a skilled illustrator too, of bare-boned drawings that are as starkly delineated as his guitar-playing.

Birthdays follows 2012’s cult debut album Dear..., and for its first half, Henson avoids slipping into post-dubstep, chillwave or hiring Skrillex in order to fit in.

But there is change underfoot. Dear… featured one drum track, so the subtle beat behind The Best Today is no biggie. But half way through the following Don’t Swim, it’s like an ember has landed in your lap.

The song’s sudden electrical charge, which persists through the following, thunderous Kronos, is the sound of Henson wrenched from his comfort zone. Birthdays’ second track suggests he’s even reached Paris.

In fact, the whole album was recorded in California by American producer Joe Chiccarelli (The Shins, The Strokes). And various guests, including Jesca Hoop on ghostly backing vocals, have chipped in.

Birthdays’ second half takes Heaton closer to Jeff Buckley’s turf: the unforced vibrato, the goosepimply effect and romantic hunger. But it’s a subtle shift, and the instrumentation only partially reconfigures the secluded spell.

Beekeeper’s occasional bouts of rock doesn’t drown out the soft peals of banjo, while the swell of French horns, martial drum and Henson’s fluttering voice in Sweetheart, What Have You Done to Us sounds like he’s still in his bedroom.

Up there, warmed by the fire, he’s cloistered away from Twitter and all the other evils of this parish. There’s no better way to shut out the din than by putting this record on. 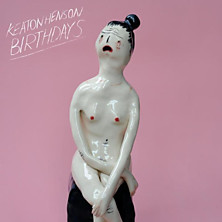