An album which manages to take familiar themes and styles and meld them into something...

As a young tyro in 1996, Theo Travis was famously described as ‘one of the very best young tenor players of this or any jazz generation in Britain’ by Digby Fairweather. He went on to win various awards and has ploughed a busy field adopting various guises as a soloist, band leader and as a member/collaborator with outfits such as Gong or Soft Machine Legacy as well as a host of the world's finest musicians such as Anja Garbarak and David Sylvian.

Double Talk sees him stepping out in front of a powerhouse trio featuring Peter Whittaker on Hammond, Mike Outram on guitar and Roy Dodds on drums, with a special guest appearance from Robert Fripp and his array of guitar-based soundscapes. The choice of guest gives the biggest hint as to the direction of this album. Travis' tenor is a warm, mellifluous instrument and together with the luscious, bluesy Hammond organ they create something rather unexpected...a prog-rock/jazz/blues hybrid album of genuine power and excitement. Think Jade Warrior meets Colloseum and you will get a sense of the anachronistic nature of the tunes here - but you won't get a sense of the surprising appeal that this album holds.

Travis hits the ground running with his tuneful tenor soaring over and around the blues-based opening track, “Ascending”. Outram's guitar heroics take an elegaic groove to another level yet it always retains a real sense of restraint and commitment. Ending with a sense of peace and harmony it melts into “Oblivionville”, the first track to feature Fripp. This 16-minute epic reflects the classical training of Travis, but sadly falls short of the ambition. By track 3 ("The Relegation Of Pluto”), though, they are motoring. The trio is back and the Hammond is pushing and probing to much more dynamic effect.

And so it goes on. Moments of quietitude and peace (Travis plays a lovely flute too) featuring Fripp at his most subtle. Even the potentially awful “See Emily Play” (presumably a tribute to the late Syd Barrett) is more-or-less saved by the textural quality of their interplay.

So, there you have it - an album which manages to take familiar themes and styles and meld them into something rather unusual and really rather listenable. It isn't a crime to let those inner prog leanings out for an airing once in a while. 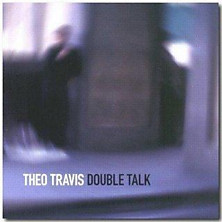