In a blindfold test, this dub collection could pass for a 1970s original, or at least a 1980s Adrian Sherwood production-warping of Jamaican experimentations. Instead, the reality is that modern-day producer Prince Fatty has versioned London singer Hollie Cook’s 2011 debut album. Fatty (aka Mike Pelanconi) is not particularly a dub reggae specialist. The form is just one of his many stylistic outlets, which makes the authentic depth of this analogue fetishist’s immersion all the more impressive.

Hollie is the daughter of Sex Pistols drummer Paul Cook, continuing the old connections between punk and dub. She was even part of the recent line-up of The Slits. Cook’s vocals bring another element, though. The sweetness of her voice calls up Lovers Rock comparisons, or maybe a feminine continuation of Horace Andy’s style. Other precedents could be Neneh Cherry or Nicolette.

It’s unusual to have a singer so upfront and constant in a dub production. Customarily, a vocal fragment will rear up and then submerge, to be replaced by sheer space, or spurts of bass, drum or keyboard echoes. The shivery ghost-keys, infinity guitar and bass molasses are present here, of course, with Crying Dub being particularly low-slung, loaded with swampy vocals, clipped keys and a seductive tenor saxophone solo.

For Me You Are Dub involves a radical dispersion of matter: dub as narrative, its phases shifting briskly, within three minutes. It’s another inspirational three minutes when The Shangri-Las are indirectly subjected to dub methods on Walking in the Sand. It’s the freshness of youth versus old-school ocean-floor plummeting.

Cook invests this uncompromising dub soundscape with her pop-attuned approachability. The album’s thundering wobble certainly can’t be deemed a result of any flabbiness. Such sonic extremity is normally out on the perimeter, but Cook gives the experimentation a specific emotional depth charge. 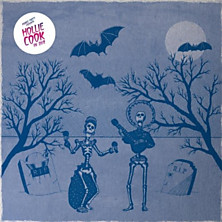