A highly original composer/stylist with the courage to radically reinvent himself.

Hamada, meaning dead or inanimate, is an Arabic word also used to describe desert rock without sand or water. The term suits Molvaer's parched mournfulness very well and acknowledges the influence of Middle Eastern music on the Norwegian trumpeter, but it's also a little counterintuitive because Hamada sees Molvaer successfully explore new territory after a period of relative inactivity.

Hamada has an impressively cohesive structure. The music begins hushed and blue before gradually building to the first of two climaxes on Friction. After further passages of murmured ambience, the group roars into life again on the howling, eight-minute Cruel Altitude and then gradually cedes to silence via the solo Lahar. The peaks are remarkably thrilling, as though Molvaer had summoned angry djinn to wreak vengeance on the listener. The djinn is guitarist Eivind Aarset, who can be favorably compared to Pete Cosey, Miles Davis' fiery lead guitarist in the 70s, and Audun Erlien whose drumming drives the music irresistibly forward.

Aarset is also bewitching for his delicate tonal work on the trilogy of Monocline, Monocline Revisited and Anticline, which brings to mind the colours of John Singer Sargent's painting Carnation, Lily, Lily Rose or the glowing indigos of Avatar's alien botany. Alongside the beauty of the sound, the contrast between the passages of anger and melancholy is key to creating the album's sense of drama.

Hamada is Nils Petter Molvaer's ninth album as leader, taking into account two remix compilations, a live album and a collection of film music, not to mention his numerous contributions to projects by Marilyn Mazur, Bill Laswell, Hector Zazou and many others. It delivers on the promise of his 1997 debut, Khmer, and marks Molvaer out as a highly original composer/stylist with the courage to radically reinvent himself. 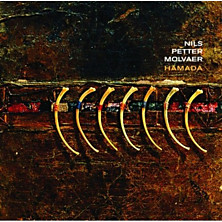