The Waterboys An Appointment With Mr Yeats Review

A passionate, poetic labour of love.

Though Mike Scott’s attempt to marry the poetry of William Butler Yeats to his own music has been promised for two decades, it offers neither the dramatic ‘big music’ of 1985’s classic This Is the Sea, nor the kind of whimsy exhibited on their rendition of Yeats’ The Stolen Child, as declaimed by Tomás Mac Eoin for the 1988 follow up, Fishermen’s Blues, arguably the two most successful albums of The Waterboys’ career. Instead it takes the more MOR sounds of Dream Harder (1993), Scott’s first solo album in all but name – for which he also arranged another Yeats poem, Love and Death – and blends in a measured dram of his beloved Irish folk. It could have been a risky concept – accusations of pretension are never far from anyone who undertakes to put poetry to music – but Scott’s conviction, alongside his years of preparation, ensures that this is a genuinely successful experiment.

Part of that is due to the fact that the text is well suited to Scott’s vocal style, hardly a surprise since he’s spent almost 30 years singing lyrics indebted to his favourite writer. That he’s not entirely beholden to a poem’s structure also helps: he allows at the very least repetition of certain lines to fit a song better, and also occasionally interjects text from other sources, as on Sweet Dancer, which includes words from Yeats’ Morality play, The Hour Glass. Ultimately, however, its success is founded upon the fact that Yeats’ poetry genuinely sounds suited to the musical settings on offer here: the band canter through The Hosting of the Shee with glee, bestow a suitably windswept romance on White Birds, and transform The Lake Isle of Innisfree rather oddly, but nonetheless effectively, into a sluggish, violin-adorned blues. Their transformation of Let the Earth Bear Witness meanwhile stands alongside some of their best, most heartfelt work to date.

There are less convincing moments – Scott’s delivery of lines like "I sing a song of Jack and Jill / Jill had murdered Jack" (from A Full Moon in March) can’t help but come across as gauche, and occasional contributor Katie Kim’s vocals are a little bland. But Scott’s permanent air of wonder, and respectful, well-crafted arrangements, allow him to get away with even the most fanciful of tales, like that of a "little silver trout" that becomes a "…glimmering girl / With apple blossom in her hair" (Song of Wandering Aengus). "Tread softly because you tread on my dreams," Yeats wrote in He Wishes for the Cloths of Heaven. Mike Scott has paid attention. 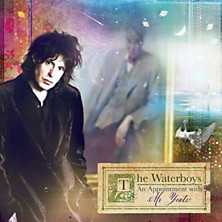