Electronic artists bringing organic warmth to their recordings are not so few and far between as black-and-white mindsets about "real" music might believe.

The days of computer-generated sounds being the stuff of sci-fi soundtracks and cult, collectors-item releases are, of course, long gone. Bonobo is one of many artists capable of crafting a widescreen and wholly organic-sounding world – and the British producer’s fifth full-length is a worthy successor to his celebrated 2010 set Black Sands.

Like its predecessor, The North Borders comprises tracks of a relatively down-tempo disposition: easy listening for those who’ve reached the dazed dawn after a wild night out.

That’s not to say they lack for movement, as the skipping momentum of cuts like Know You and Emkay – the latter a partner in its percussive patterns to Black Sands’ Andreya Triana-starring Eyesdown – prove. Lead single Cirrus is evocative of Four Tet’s chiming edge-of-the-dancefloor numbers, a track that’d sit pretty in any warm-up DJ’s set, gently coaxing bodies into motion.

And like Black Sands, Bonobo – real name Simon Green – invites a host of vocalists to sing atop a handful of his early-hours arrangements. Closer Pieces, with Cornelia, is a sweet combination of popping beats and almost child-like vocals, something like Woodpecker Wooliams joining Nosaj Thing for a transatlantic chill out.

First Fires, with Grey Reverend, could be mistaken for a James Blake number at distance – though its sumptuous strings might feel a little incongruous in the Mercury Prize nominee’s average mix.

The highest-profile guest is Erykah Badu, whose turn on Heaven for the Sinner is expectedly immediate yet extraterrestrial. Nobody does Badu like Badu, and long may that continue.

The North Borders isn’t a giant step onwards for its maker – rather, it feels like a very natural extension of Black Sands, with everything pitched just that little bit better, each arrangement sparkling a touch more. It’s incremental progression – notable but, in the grand scheme, not revelatory.

But Bonobo’s not an artist of grandstanding statements. He’s too experienced for that. These songs are perfect in their pigeonhole: to his established audience, wide as it is, they’ll be warmly welcomed, and those who see electronic music as the enemy are recommended to spend some time with it. Cold and calculated, soullessly synthetic, this is not. 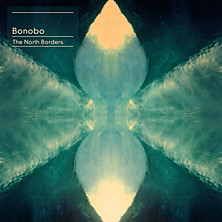