A pale live release, recommended for the hardcore only.

Pat Metheny has been working with the Orchestrion for some while now, along with a team of technicians, instrument makers and programmers. It's an automated orchestra, controllable from Metheny’s guitar, allowing him a degree of autocracy he probably couldn't get otherwise.

The Orchestrion is comprised of custom-made or modified instruments played by an assortment of computer-controlled hammers, magnets, beaters, bellows and so on. It’s like a giant player piano, or a fairground organ.

This live set was recorded without an audience during a world tour. It contains the suite of five pieces Metheny wrote for the Orchestrion studio album, plus some old favourites from his back catalogue.

The specially written pieces are superficially similar to much of his output from the last decade. They are complex, intricately constructed but somehow undemanding fusions of Brazilian music, rock, jazz and minimalism.

While there's plenty to tickle the ear, there's inevitably quite a mechanistic if not synthetic flavour to the proceedings. This can become increasingly wearing, something the constantly shifting textures can't mask.

However, the lack of heart in the backing does serve to highlight the warmth and expressiveness of Metheny's guitar work, which is predictably flawless throughout.

The "Orchestrionised" versions of the older pieces are a mixed bag. The otherwise lovely Unity Village is blighted by an intrusively metronomic percussion part.

But the stripped-back Sueño con Mexico and the mournful Tell Her You Saw Me are much more effective, bringing out some of the guitarist's most lyrical playing.

The slightly chaotic medley of 80/81 and Ornette Coleman's Broadway Blues hints at where things might have gone had Metheny been a bit more adventurous and explored the particular qualities of the Orchestrion rather than using it as a glorified karaoke machine.

The two improvisations feel like demonstration recordings rather than genuine explorations, though it's there that the instrument probably has most potential.

The Orchestrion is impressive when seen in action. But Metheny’s use of it here delivers a pale, expensive shadow of what a real band can achieve. The project doesn’t feel like it has longevity, and this release is for the hardcore only. 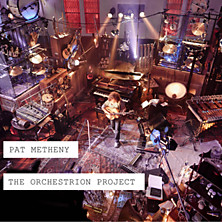