New collection from one of the great institutions of the Scottish music scene.

There’s nothing like anger to concentrate the mind, and it’s the global banking crisis, along with the bonuses claimed by bankers and MPs alike, that provides the inspiration for this impressively varied and entertaining album by one of Scotland’s great veteran bands.

The theme here is greed, and the tragedies that the search for wealth can bring. The best track, Robber Barons, written by Battlefield Band’s founding member Alan Reid, sums up the mood. It’s a song of quiet and thoughtful fury, rather than furious polemic, in which he’s backed by accordion, pipes and whistle to tell the story of medieval robbers who made a fortune by extracting dues from merchant ships travelling up and down the Rhine. They are compared to those in present-day banks who helped to cause the banking crisis, but have continued to award themselves with huge salaries and bonuses, and there’s an added attack on those British Members of Parliament who abused the expenses system.

It takes a mature and sophisticated band to do justice to such a song, but Battlefield Band are just that. Founded 40 years ago in the Glasgow suburb of Battlefield, they have become one of the great institutions of the Scottish music scene. They have experimented both in their instrumental line-up, matching fiddle and bagpipes against guitar and keyboards, and the way they have mixed traditional and contemporary songs. But though they have toured widely, playing everywhere from China and India to the USA, they have never quite earned the level of success they deserve.

This album should help to put that right. Half of the tracks are songs, which range from the bleak whaling story Greenland’s Icy Waters and an equally dark story of unrequited love, Plain Gold Ring (originally sung by Nina Simone), through to a song in Gaelic (again concerned with gold) backed by a haunting combination of fiddles and Highland pipes.

The other half consists of instrumentals that show off the band’s classy and varied playing. The tunes range from quicksteps to Irish jigs, featuring fiddle, bouzouki, guitar, keyboards and pipes. But even here it’s anger at the corrupt fat cats that provides the inspiration: Bernie’s Welcome To Butner is a ‘salute’ to Bernie Madoff, convicted of the largest investment fraud in Wall Street history, as he begins his new life in Butner Federal Correctional Complex, North Carolina. 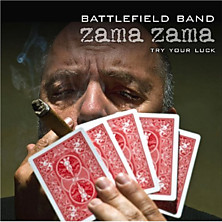