Lou Reed and Metallica unite in compelling and contrary union.

In many ways Metallica have for a long time been not one, but two bands. In the summer months they are the world’s premiere full-blooded rock act, content to bask at such locations as Yankee Stadium in the legacy afforded them by albums such as Master of Puppets and songs like Enter Sandman. But as a corollary to this there exists a group whose creative heart beats daring and strong. The Bay Area quartet first met Lou Reed – a man whose own artistic pursuits have for decades been captured on releases both excellent and execrable – when both parties were part of the class of 2009 inducted into the Rock and Roll Hall of Fame in Cleveland. The five men got talking and decided to make an album. Perhaps it’s a good job Bette Midler wasn’t being honoured that day.

Although, in truth, this is not quite as startling an album as its billing may suggest. Inspired by a series of demos prepared by Reed for a musical production of two plays by the 19th century German dramatist Frank Wedekind – which in itself offers a clue that this is no Back in Black – Lulu adheres to both of the parties’ core instincts: on the part of Metallica there is an elongated and thoughtful, not to mention breathlessly heavy, musical spine; while Lou Reed’s atonal and monochromatic vocals lay with deliberate ill-ease atop it all, like an oil slick on an ocean.

At 90 minutes in length, Lulu is no light snack. The overall effect of the album is one of claustrophobia, of an unsettling and relentless assault that is more artistic instillation than rock opera. These are the aspects of the album that will take time to bed-in, in order that the jarring nature of much of this work will acclimatise itself to the listener’s ear. But even allowing for this it seems clear that this collaboration adheres to a careful and deliberate design. Following the avalanche of oppression that precedes it, Lulu’s denouement comes in the form of the 19-minute Junior Dad, a track with a groove of such gloriously hypnotic power that its effect is akin to being rescued after months trapped in a pothole.

Much advance word of Lou Reed and Metallica’s excursion has been one of bewilderment and dismissal. It may well be, though, that in the fullness of time this is an album that is given the praise it deserves. 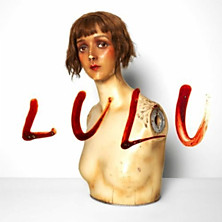