The Naked and Famous Passive Me, Aggressive You Review

The last thing any fresh-faced band wants to hear is "hold your horses", but the slow-burn rise to fame can have ameliorating effects. Auckland’s The Naked and Famous topped New Zealand’s chart with their debut single, a synth-pop fist-pumper called Young Blood, and they’ve spoken about their hunger to bust their country’s confines and repeat its success elsewhere. No shame in that. But a rapid rise might well throw a harsh light on the quintet, whose potential is let down by the giveaway of a band still unsteady on their feet: transparency of influence.

Their debut is an eager beaver, bustling with melody and colour, but little of it is fresh. Young Blood and its dutifully punchy, dream-pop follow-up single, Punching in a Dream, take their fuzzy-catchy cues from MGMT, with reductive romantic self-immersion diluting the lashing sarcasm of Kids and Time to Pretend. Alisa Xayalith and Thom Powers’ boy-girl harmonies recall The xx by way of, on the mumbled-word outro of Frayed, Massive Attack. The abrasive psych-rock surges of Spank and A Wolf in Geek’s Clothing threaten to generate sparks, yet the shadows of Nine Inch Nails and The Chemical Brothers weigh heavy.

It’s disappointing because, although orchestrating ingredients is hardly the same as innovating, TN&F’s knack for layering songs and sounds could go somewhere interesting. They write strapping, festival-fit tunes, yet toy with template-stretching textures on The Sun and The Source. Ripples of drama fleetingly enliven Xalayith and Powers’ vocal interplay, she the forceful yin to his drowsy yang. And, in All of This, a sense of wistfulness sits well with an anxious, driving melody.

That very urgency, though, is less well-served by a tendency to lapse into default bluster-pop positions, as if therein lies the surest means to force the A-to-B of Auckland-to-breakaway success. The 1980s synthetics of Eyes offer one example; so do the gusty guitars that strafe the otherwise welcome reserve of No Way. You could justify that over-emphasis as evidence of a broad-ranging band flexing their options and chafing at their limits. But, in songs and career alike, you could also say The Naked and Famous might benefit from a sense of pacing. 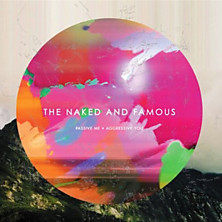