Nada Surf If I Had a Hi-Fi Review

A surprising and emphatic success of a covers collection.

Rather than attempting to distil all of their influences into one covers record, major label rejects-turned independent mainstays Nada Surf have chosen to capture the songs that were, as you might expect, in their hi-fis at the time of recording. Consequently and unlike most covers records, If I Had a Hi-Fi (which, rather neatly, is a palindrome) sounds wonderfully fresh and easy, but also yields some unexpected pop trinkets. Chances are this is because the range of artists covered is wide enough and, crucially, the record sounds like it would’ve made a good mix-tape even if they hadn’t recorded it themselves.

They rollick mightily on the likes of Bill Fox’s Electrocution and a masterfully perky version of The Go-Betweens’ Love Goes On, but they also find emotional depths to plumb on Kate Bush’s Love and Anger. In fact, the Bush track sees vocalist Matthew Caws at his most imitative (complete with a range of rhythmic tics and copied idiosyncrasies), but the meat of the song is never forgotten. Cannily, they manage to get to the very root of all the material with ease, with no more tools than spangly guitars and some decently constructed vocal harmonies. If anything, it’s a testament to the value of taut efficiency in rock ensembles.

The very strongest examples are perhaps the most well-known choices. Their considerable overhaul of Question by The Moody Blues is, like the original, a double-headed beast, by turns raucous and beautiful, but Nada Surf dutifully amplify the raucous, prettify the beautiful and transform it into something quite far-reaching. Likewise, Enjoy the Silence by Depeche Mode might not be the most surprising choice, but it is tremendously affecting thanks to the breezy weariness of the delivery.

These versions might not all be shocking re-interpretations, but Nada Surf demonstrate ably that they completely understand the merits of the music they're working with, and the results are ours to gratefully digest. The band’s brushes with the mainstream in their earlier career has clearly led to them relishing their relative obscurity, and If I Had a Hi-Fi is proof that their craft is all the better for it. A surprising and emphatic success. 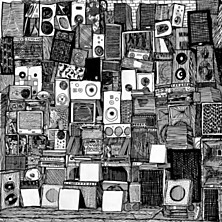