The Pumpkins’ best album contains one of the greatest guitar-pop songs ever.

The Smashing Pumpkins are… were… are? Sorry. The Smashing Pumpkins were not a grunge band. (Billy Corgan’s current outfit truly isn’t worthy of the name.) They were always Stadium Rock Behemoths that had to wait a while to actually become Stadium Rock Behemoths. Their debut LP, Gish, might have emerged in 1991, year zero for grunge with the release of the world-conquering Nevermind. But any similarities to Nirvana’s chart-topper were slight sonic parallels courtesy of sharing the same producer, Butch Vig. The bands came from very different places, and took very different directions. For Kurt Cobain fame and fortune was seen, publically at least, as an aside to his art; Corgan, meanwhile, had his sights on setting the music world ablaze however he could.

From the first rallying call of Cherub Rock – “hipsters unite” – it’s obvious to even the laziest listener that the Pumpkins’ second LP is a calculated exercise in exploitation, ticking the necessary boxes of a market spoilt rotten by the post-Nevermind boom in plaid-clad musicians full of angst they should have grown out of already. But while it’s full of clichés, Siamese Dream (again with Vig on production) is in no way a bad album. It’s the yin to Nirvana’s yang of In Utero – both albums released in 1993, one a shiny statement of mainstream-courting intent, the other a bleak withdrawal from such a position into one of leave-me-be caterwauling. At no point does Siamese Dream not sound massive: Cherub Rock has only just settled into silence before Quiet begins its bludgeoning of the listener’s senses. It features a moment where Corgan seems to call out his grunge-era peers-cum-rivals – “We are the fossils / the relics of our time” – before lyrically turning his back on what’s been for a future painted gold.

Not before a moment’s pause, mind – it’s the most-tender tracks on Siamese Dream that have endured better than the blitzes that surround them, and Today is the best song Corgan has ever written. The only song that comes close in the Pumpkins catalogue is 1979, from 1995’s sprawling double-album Mellon Collie and the Infinite Sadness. (Oh, go on: I’ll give you Tonight, Tonight from the same album, too.) There is such purity to the line “today is the greatest day I’ve ever known” that it will never age. However much Corgan continues to pour misery on Pumpkins fans with his persistent misadventures matters not a jot when he’s got this in his back pocket, ready to roll out at any show and have all in attendance forgiving everything, if only for three glorious minutes. Nutshell: Today is one of the greatest songs of all time.

There are further highs to be found on Siamese Dream – the soaring-and-screeching Mayonnaise was a big favourite of mine back when, and Rocket and Disarm are memorable singles, the latter a string-laden lament of uncommon intensity (banned from Top of the Pops at the time due to some ambiguous lyrical content). The album earned Grammy and MTV Award nominations, and is frequently listed as one of the best long-players of the 1990s. In truth it’s not as brilliant as it thinks it is, but this is a collection that will always be well received when it pops up on shuffle – albeit primarily because of its still-stunning centrepiece, Today. 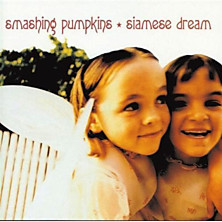