Josh Ritter So Runs the World Away Review

Six albums into his career, and with a novel on the way, Josh Ritter has become a feature on the landscape of American songwriting through quiet persistence. In a sense, So Runs the World Away might be the grand statement he’s been building towards, although you might not know it from the first listen. The best songs here charm their way into your affections more than they grab you, and if few stand out it’s because they’ve all been so carefully crafted.

Over the course of these songs, Ritter (or his nameless characters) travel the length and breadth of a magic realist world – albeit the magic realism of bourgeois novelists whose heroes have dried figs for hearts, and scarabs for eyes (the poem as antique shop) rather than the literature of hope against the odds, produced under conditions of political oppression. Matching this tasteful bricolage of wolves and icicles, Bibles and shells, is a musical accompaniment of glockenspiel and banjo, clarinets, trumpets and ukes. You’ve heard this kind of indie-folk before, just as you’ve heard most of these tropes before, but Ritter throws everything into his image-rich lyrics, showing he can be an accomplished imitator of the novelists he admires (eg Muriel Spark), and a few of the songs even work as stories (eg The Curse, which has the same premise as The Triffids’ Jerdacuttup Man).

As for the songwriters he resembles, well, that’s another matter. Musically, Ritter might be somewhere between Damien Jurado and Ryan Adams; but both put an urgency into their vocal performances, and the general lack of it might be a sticking point for listeners wanting more than just pleasant and catchy. For my money, Ritter’s preferable to Andrew Bird or Villagers (similarly pleasant and catchy, but oddly affected in a way that can grate). When Ritter attempts raucousness (The Remnant) he’s unconvincing and too polite, and when he attempts epic (Another New World) he over-stays his welcome. Folk Bloodbath is a cute re-telling of Stagger Lee but cute may not feel appropriate to a murder ballad. Still, there are ten other very fine songs here, this album shows Ritter developing continually, and there’s potential for greatness, in time. 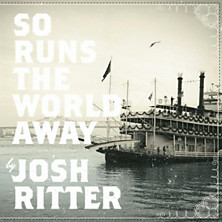