Duran Duran All You Need Is Now Review

Following massive early success, ego-fuelled side projects, line-up changes and yachting accidents, Duran Duran completed the full rock career trajectory in 1993 with a triumphant comeback. The Ordinary World single and its parent album rekindled public affection and critical acclaim for a band most had consigned to nostalgia shows. Since then the group’s creative flame has flickered fitfully, though 2004’s Astronaut and the Timbaland-assisted follow-up Red Carpet Massacre demonstrated that all was not lost.

For All You Need Is Now, Duran Duran have enlisted another celebrity producer, but this time one who understands them as a fan. Mark Ronson has never been shy about his love for the band, and here he brings out the best in Simon Le Bon’s voice. This is particularly clear on the restrained Leave a Light On; lyrics such as "You ease the lost cause out of me" even brushing the heights of their sublime Come Undone.

They have thankfully stopped seeking credibility, and it suits them. Their calling card here is the garage rock of the title-track (if you can imagine a garage band playing alongside Bentleys), which morphs into a soaring chorus reminiscent of Rio. Scissor Sister Ana Matronic slots perfectly into the disco-flecked Safe, an unashamed return to their original sound. They sound similarly well preserved on the slinky Being Followed, and Girl Panic! also mines their new wave roots.

Unsurprisingly for a band renowned for singles over albums, the 14 tracks include some misfires. Le Bon’s complaint about "glossy lifestyles staring out of magazines," on the plodding Other People’s Lives, particularly riles. Runaway Runaway is throwaway, while the perfunctory funk of Blame the Machines is a heartless grind until its middle eight, reminiscent of Ronson’s recent Record Collection, finds newsreader Nina Hossain telling the listener, "You’re not required to think".

Their Smash Hits days may be as over as Smash Hits itself, and further crossover appeal has probably passed, but their admirable persistence in recording new material has paid off. This album, Mark Ronson’s "imaginary follow up to Rio that never was", is their best for 18 years. 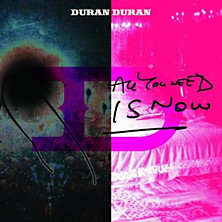