The basic information about a new band can be telling. For example, Love Inks, a minimalist indie-pop trio comprising husband-and-wife team Sherry LeBlanc (vocals) and Kevin Dehan (bass) and guitarist Adam Linnell, named their band after some ancient voodoo involving writing magical new love letters in ink created from the burning of old ones. They’re also completely self-financed and recorded their album on a reel-to-reel tape recorder: the musical equivalent of commuting to work by horse and cart. So I’m just about willing to believe that they weren’t discovered busking at the South By Southwest music convention in their hometown of Austin, Texas and convinced by some passing exec that the best way to succeed in 2011 was to place the indie world’s two most trendy reference points – The xx and Fleetwood Mac – into a lo-fi blender and get it out there before we’ve all moved on to Einstürzende Neubauten and Huey Lewis and the News.

The other thing that jettisons the cynicism, of course, is that their first long-player is very, very good, especially if you love The xx, Fleetwood Mac… and Young Marble Giants. The latter were an eerily sparse post-punk trio with a female singer whose brilliant idea was to play punk rock like a late-night whisper, and Love Inks have copped much of their sound: bass as lead instrument; almost jazzy less-is-more guitar; sighing, horizontal vocals. The one thing they add is one of those drum machines that sounds like you have to power it by steam.

It’s a lo-fi aesthetic based on a sort of sleepy intensity and immaculate good taste; their version of David Essex’s Rock On is smart without being smartarse. And the best songs share a conceptual wit with many of the finest pop art bands. Single Blackeye, for example, sounds like Hope Sandoval singing over a Smiths demo, lasts less than two minutes, and consists entirely of the lines: "You’ve got black eye on your eye/ Tell me was it from a fight, baby?/ Did it happen last night?" It could be an inappropriately romantic protest song about domestic violence. It is, in fact, inspired by seeing a friend’s face in a scurrilous Texas magazine called Busted, which prints mugshots of the recently arrested.

Less than 30 minutes long, E.S.P., like The xx’s debut, insinuates itself a little further into your psyche with each spin, like easy listening with a sinister intent. Whether Love Inks can go anywhere in future with something so defined remains moot. But their debut will send a short, sharp love letter straight to your heart. 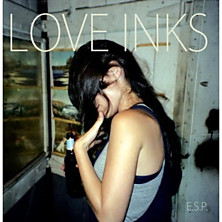