Herbie back in hiphop/drum n' bass mode with Bill laswell in the producers chair, plus...

Since the mid 70s and the breakup of the Headhunters, Herbie Hancock's career has maintained a sometimes uneasy split between hi tech synthesised excursions in the direction of the dancefloor, and a commitment to the acoustic jazz tradition through his work with Wayne Shorter among others. Future 2 Future is firmly in the former camp and reunites Herbie with producer Bill Laswell, who crafted the electro hip hop settings that graced Hancock's Future Shock, Sound System and Perfect Machine. Future Shock and its hit single "Rockit" put Herbie at the forefront of the 80s digital explosion, and Future 2 Future seems designed to place him back at the cutting edge.

Certainly the album kicks off in fine style with a recreation of the humid atmospherics of 1973's Sextant with "Kebero Pt 1", a dense, driving slice of juicy cyberfusion constructed by Carl Craig. Hancock contributes delicate yet muscular Rhodes piano and a squelchy clavinet riff. The utter brilliance of this track (and Pt2 ) makes some of what follows a bit of a disappointment. "The Essence" is limp drum n' bass fuelled soul with vocals by Chaka Khan which despite a tasty piano solo, fails to lift off. Likewise "Black Gravity" and "Ionosphere" sound dated, with their stiff beats too fussy to provoke much in the way of groove or improvisational flair. Hancock's playing thrives on space and here he sounds hemmed in and uncomfortable; ironically those influenced by him have done this kind of thing much more successfully. Far better are the tracks where real drummers provide the grooves; "Tony Williams" features a drum track laid down by the man himself not long before he died, overdubbed by Hancock, Wayne Shorter's soprano (here sounding a bit like Steve Lacy) and the poetry of Dana Bryant. To everyone's credit, it doesn't sound like a studio construct, and Williams still astonishes.

Finally there's a nod back to Sextant with a recasting of that album's proto techno epic "Hornets" as "Virtual Hornets". Herbie provides oceanic bleeps and atmospherics as well as some typically lush electric piano chords; bassist Charnet Moffett locks tight with Jack de Johnette's drums as Wayne Shorter takes up the tenor for two solos; the first a breathy episode of chromatic runs, the second a typically fluid display of oblique harmonic and rhythmic turns. Brilliant.

More of this, less Laswell and more Carl Craig (Herbie should enlist him as producer next time) and this would be a classic record; as it is though, worth a listen and testament to the fact that Hancock is not a man to sit on his laurels (and he's got a lot to sit on). 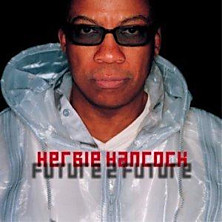