One of Mali’s most popular artists continues to impress on the global stage.

In a very short time, Bassekou Kouyate has established himself as one of Mali’s most popular artists, both in the recording studio and on the live stage. Kouyate also rejoices in an unusual band formation, which includes four players of the n’goni, manifested in its differing tonal sizes. It’s a gossamer string deluge...

The n’goni is a variably sized lute-like instrument that’s more spiritually connected to the banjo; it's usually got between four and seven strings. Kouyate plays most of the solo licks, and his Ngoni ba bandmates set up a dense strumming pulse, interspersed with intricately arranged outbreaks of staccato punctuation.

These ostensibly simple instruments are capable of immense expression, intensified by the densely layered production techniques of Howard Bilerman, who’s previously manned the controls for Arcade Fire and the Godspeed crew.

Ngoni ba also features two percussionists and the charged lead vocals of Amy Sacko. The sessions coincided with the Malian coup, and were surely sharpened by the country’s atmosphere of uncertainty.

Kouyate’s solos are surrounded by a phased, burning aura, as his bent-note elaborations head further towards the desert rock of Tinariwen. He manages to explore this freshly electrified path without losing his acoustically sensitive properties, combining the crucial aspects of both loud and soft amplification levels. The small resonating box becomes a ringing chamber of contained power.

This third album features an array of guest stars, but these are ingested deep within the composite band belly, without seeming too starkly gratuitous. The veteran master Kassé-Mady Diabaté sings with Sacko on Sinaly, but the lesser-known Zoumana Tereta makes a greater impact, his husky, weathered tones dominating three songs.

The n’gonis are always upfront, but this is also an album of stunning vocals. Khaira Arby guests on Kel Magni, delivering her expectedly transcendent invocation for peace, the tune tripping towards a clapping, lurching escalation.

The only track where a guest forces a complete transformation is Poye 2, where Taj Mahal prompts a slow blues slog, invoking the spirit of Howlin’ Wolf, trading vocals with Kouyate in French and English.

Then, it becomes clear that the wildest acceleration was saved until last, with the closing highlight, Moustafa. 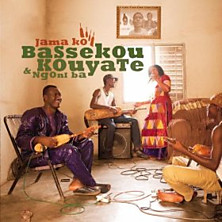