Although he has recorded for Blue Note for 20 years, it is significant that saxophonist Joe Lovano’s recordings are now jointly credited to Us Five. Before putting together this exciting young band, Lovano was on a comfortable artistic plateau. The band of two drummers, bass and piano has received great acclaim and helped revitalize his music.

Their second album, Bird Songs, explores the music of Charlie Parker but it is far from being a tribute album. Instead of recreating Parker’s arrangements of his compositions, the pieces are rethought and interpreted in fresh, imaginative ways. The idea for the album began when the band introduced a special arrangement of Parker’s composition Barbados with a Caribbean feel, the twin drummers Otis Brown III and Francisco Mela creating a more infectious beat than on the original.

Lovano repeatedly draws upon the creative talents of his young bandmates. Not every piece involves all five musicians; several deploy Lovano plus two others. So, Ko Ko becomes a free improvising piece for saxophone plus the drummers, with Lovano breaking the familiar theme into melodic fragments on which he improvises while the drummers go their separate ways.

Blues Collage combines three of Parker’s blues compositions, played simultaneously by alto saxophone, bass and piano; Carvin’ the Bird is played by Lovano, Bird Feathers by bassist Esperanza Spalding, and Bloomdido by pianist James Weldman. The juxtaposition is as effective as it is bold, described by Lovano as, "a little fugue within the three of us".

Lovano plays his trademark tenor saxophone on eight tracks, plus alto sax, soprano sax and his unique double-soprano horn, the aulochrome, on one track each. He avoids imitating Parker’s playing style, preferring to play his own way. Both Donna Lee and Moose the Mooch are played more slowly than the original versions, enabling Lovano to radically alter the way he plays them.

The true tests of an album of compositions such as this are, firstly, that it produces original, stimulating music and, secondly, that it makes one return to the original versions to listen to them anew. On both counts, Bird Songs succeeds admirably. 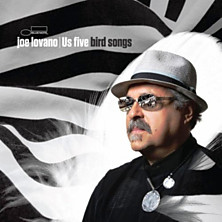