A supergroup they may ostensibly be, but it’s hard to shake the impression that – despite the presence of Radiohead producer Nigel Godrich, Red Hot Chili Peppers bassist Flea, regular Beck drummer Joey Waronker and Brazilian percussionist Mauro Refosco – in reality Amok is the second chapter in Thom Yorke’s solo career.

It’s hard, too, to avoid comparing Amok with Radiohead, given Yorke’s distinctive voice and talent for an unusual tune, both of which remain central to his new project.

Here, however, he immerses himself fully in the glitchy electronica that’s inspired him since working on Kid A. Though there are traits familiar from recent ‘head albums – The King of Limbs’ Feral, for instance – Amok has its own restless, simultaneously sophisticated and gauche personality.

In fact, it displays the same twitchy rhythms and occasionally genial sincerity that Yorke displays with his onstage dancing.

Built from three days of studio jamming around existing laptop sketches, its intent is to lend electronica a sense of songcraft, to create a world where digital and analogue blur, and frequently it succeeds.

Yorke’s ghostly falsetto traces an easily followed line through the agitated percussion and nebulous textures of Before Your Very Eyes and Unless, while Stuck Together Pieces’ defining features are a rolling bassline and rippling guitar that drift amidst the muted clatter of programmed beats.

Judge, Jury and Executioner, meanwhile, buries acoustic guitars in a cloudy chorus of incorporeal vocals, its slightness deceptive thanks to a weirdly infectious melody, and there’s a sense of claustrophobia inherent in Ingenue’s befuddled atmosphere and oddly tropical backdrop.

But the more one delves into Amok’s spasmodic content the more one perceives the characteristics that make Radiohead so special: the unexpected breakdown, the unforeseen musical diversion.

Here, though, divorced from Yorke’s other band’s familiar expressive delivery, their genesis as abstract ideas generated in solitude is occasionally too conspicuous.

Nonetheless, while Amok – like The Eraser – is unlikely to arouse the same passions as, for instance, In Rainbows, it’s an often fulfilling and fascinating indulgence. Yorke remains consistently inventive, whatever company he keeps. 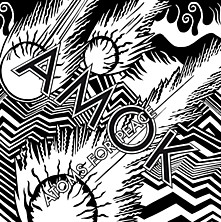