Trish Clowes And in the Night-Time She Is There Review

A timely reminder of the tenor saxophonist’s great talents.

In September 2012, tenor saxophonist Trish Clowes became a BBC Radio 3 New Generation Artist, the first female jazz artist to be recognised by the scheme. Right on cue, Basho Records released her second album, And in the Night-time She Is There, as a timely reminder of the talents that led to her being selected for such recognition.

As on her impressive debut album, Tangent, Clowes here plays in a range of contexts from a duo through to a jazz quintet plus strings. The main difference this time around is that an improvising string quartet, led by violinist Thomas Gould, is used instead of an orchestra.

Otherwise, the personnel is very similar to that on Tangent, centred around the nucleus of Clowes, guitarist Chris Montague, bassist Calum Gourlay and drummer James Madden. Why change such a winning team?

All the compositions are Clowes originals. Time and again they demonstrate her ear for a strong melodic line. Those lilting melodies are heard at their best when she plays them with her warm, mellow saxophone tone, which has rightly been compared to the great tenorist Stan Getz.

In the pieces played by the core quartet (occasionally augmented by Heidi Parsons on cello), the interactions between the saxophone and Montague’s electric guitar command attention, providing ample evidence of their time playing together.

The album’s only vocal track is The Sphinx, with lyrics from Oscar Wilde’s poem of the same name. The album title is a quote from those lyrics, which are beautifully sung by guest Kathleen Willison with a fine solo interlude from Clowes. But the tracks that make this album truly remarkable are those with the string quartet plus guest pianist Gwilym Simcock completing a nonet.

Central to the album is Iris Nonet, a three-part suite dedicated to Clowes’ late grandmother, on which the strings do not play a score but improvise an accompaniment. This gives the piece an edginess and freshness far removed from many jazz-plus-strings collaborations.

A duo between Clowes and Montague on the modestly titled Little Tune brings the album to a suitably beautiful conclusion. More, please. 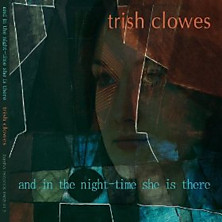