The commercial success of Lady Gaga hasn’t so much as put a dent in electronic pop’s 21st century cool quotient, as young wannabes continue to hanker for a rose-tinted 1980-82, when guitars were dismissed as “rockist”, every local disco wanted to be Studio 54 or The Blitz, and Bowie and Roxy Music fans in heavy make-up and glamour threads stood motionless behind keyboards, being vampy, campy and elegantly existential.

So, as new electronic boy bands Monarchy, Hurts and Mirrors go all out to give us brand new versions of Pet Shop Boys, Tears for Fears and OMD, there has to be the girl-group equivalent. Hailing originally from Brooklyn – where else? – but now based in Vancouver, Canada, this fashionista duo named after a South Korean urban myth about electric fans sucking the air out of sleeping children have made a debut album that successfully adds up to more than the sum of its hip influences. And besides: how can you not love overdressed nightclub mannequins called Dandilion Wind Opaine and Marta Jacuibek-McKeever?

Fan Death confidently and conveniently meld the approaches of Hercules and Love Affair and Fever Ray. From the former they take a love of early 80s gay disco and the beats of electro and the sadly short-lived Latin hip hop scene; from the latter, stately and enigmatic synth exotica, all bound together by Opaine’s bleak and grandiose lyrics and blank, Teutonic vocals, and a constant undertow of Italian disco synth sounds.

Despite the agreeably cheesy catchiness of the likes of Choose Tonight, When the Money’s Right and The Best Night, its all a little too immaculately tasteful to lay claim to any of the Gaga millions, but it works perfectly as a pop equivalent of arthouse cinema. Reunited is a gorgeous New Order tribute and producer/co-writer Szam Findlay’s artful mix of just about every iconic electronic style of the 80s will induce waves of pure pleasure in those of us who will never tire of a melancholy melody, a dodgy synthetic string motif and a disco beat. 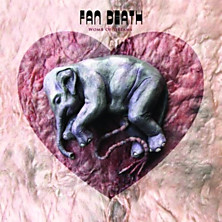